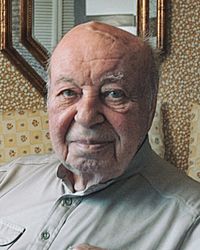 Heinz Jakob "Coco" Schumann (14 May 1924 – 28 January 2018) was a German jazz musician of Jewish descent and Holocaust survivor. He was born in Berlin. He became a member of the Ghetto Swingers while in Auschwitz. In the aftermath of the Holocaust, Schumann performed as a jazz guitarist, performing with Marlene Dietrich, Ella Fitzgerald, and Helmut Zacharias.

His autobiography The Ghetto Swinger: A Berlin Jazz-Legend Remembers was published in 1997.

All content from Kiddle encyclopedia articles (including the article images and facts) can be freely used under Attribution-ShareAlike license, unless stated otherwise. Cite this article:
Coco Schumann Facts for Kids. Kiddle Encyclopedia.