Colac is a town in the western district of Victoria, Australia. It is about 150 kilometres south-west of Melbourne on the southern shore of Lake Colac. In 2011 there were 11,415 people living in Colac.

The first people to live in the area were the Gulidjan people. They had lived in the grasslands around the lakes for at least 30,000 years.

European settlers moved into the area in 1837. Within three years most of Gulidjan lands had been taken over by sheep farmers.

The first European settler was Hugh Murray. In 1848, the town was named Lake Colac.

Colac Botanic Gardens in Queen Street is next to the shores of Lake Colac. They were first planted in 1868, and remodelled in 1910 by William Guilfoyle. There is a large number of different of plants with many old and rare trees and a rose arbour.

A commemorative plaque on the southern side of the Memorial Square remembers two historic speeches given on consecutive nights in Colac. The two speeches declared Australia would join Britain to fight in World War I. On 5 September 1914 the Leader of the Opposition, Andrew Fisher said "...Australia will stand by the mother country to our last man and our last shilling". The next night, the Prime Minister Joseph Cook said that "...If the old country is at war, so are we". 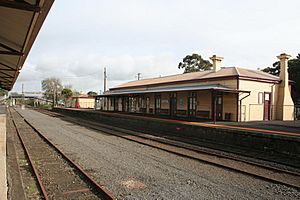 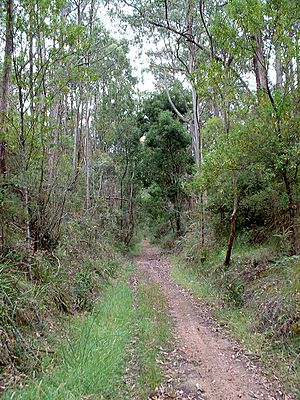 The railway reached the town in 1877. From 1883 the line was extended to reach as far as Port Fairy, in the south west of the state. The Irrewarra-Cressy line to Ballarat also ran from Colac between 1889 and 1953. There was also a branch line to Alvie opened in 1923 and closed in 1954. A narrow gauge railway line began in Colac going south to , the small towns of Beech Forest, and Crowes. This line opened in 1902 and closed in 1962,

The local railway station is served by V/Line passenger services on the Warrnambool line. The train stops at Camperdown and Terang.

Colac is on the Princes Highway .

Colac is the home of the annual "Cliff Young Australian 6-day race". The event has been going for over 20 years and is a running/walking event. It is held in the Memorial Square which is in the middle of Colac and attracts entries from all over the world.

The main industries are based on agriculture including dairy, beef, lamb and finewool merino industries, and a large timber industry. These include Bulla Dairy Foods, CRF Colac Otway Pty Ltd, Fonterra, Cororooke, and AKD Softwoods.

Television services are received via UHF from Ballarat Lookout Hill, as well as a local repeater on nearby Warrion hill.

Colac also has a swimming club which trains swimmers and has athletes competing at Region, State and national competitions.

Colac also has a baseball club, the Colac Braves, which plays in the Geelong Baseball Association winter competition and the Pan Pacific Masters Games on the Gold Coast.

All content from Kiddle encyclopedia articles (including the article images and facts) can be freely used under Attribution-ShareAlike license, unless stated otherwise. Cite this article:
Colac, Victoria Facts for Kids. Kiddle Encyclopedia.