Cologne was platted in 1880, and incorporated in 1881. The community was named for Cologne, Germany.

In 1939, the town of Cologne was preserved on film in the amateur short subject Cologne: From the Diary of Ray and Esther, which chronicles aspects of life in the German-American community prior to the American engagement in World War II. The film was named to the National Film Registry in 2001, and is one of only a half-dozen amateur works to be included on the list.

In March 2015 the city of Cologne, Minnesota hired Jesse Dickson as their city administrator. 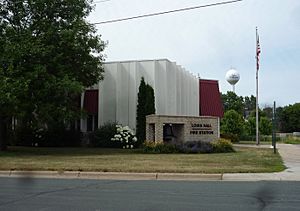 Louis Hall and Fire Station with Water Tower in background

There were 539 households, of which 45.3% had children under the age of 18 living with them, 63.8% were married couples living together, 5.0% had a female householder with no husband present, 5.0% had a male householder with no wife present, and 26.2% were non-families. 19.1% of all households were made up of individuals, and 4.6% had someone living alone who was 65 years of age or older. The average household size was 2.82 and the average family size was 3.29.

Cologne has several buildings listed on the National Register of Historic Places.

U.S. Highway 212 and Minnesota State Highway 284 are two of the main routes in Cologne.

All content from Kiddle encyclopedia articles (including the article images and facts) can be freely used under Attribution-ShareAlike license, unless stated otherwise. Cite this article:
Cologne, Minnesota Facts for Kids. Kiddle Encyclopedia.