Coloma is a village in Waushara County, Wisconsin, United States. The population was 450 at the 2010 census. The village is located within the Town of Coloma. Coloma is home of the annual Coloma Chicken Chew, held at the end of June.

The Coloma area was first settled in 1849 by John Drake and a man named Stowe. Stowe stole lumber Drake left in the area when Drake had to leave due to a family illness. Stowe built a tavern with the timber, leaving Drake to build his tavern out of rough hewn logs.

By 1875, the area was known as Ross Corners, after the local postmaster. A railroad between Stevens Point and Portage was soon built, coming through four miles to the east at a spot called Coloma Station. The post office was moved from Ross Corners to Coloma Station, and Ross Corners soon became known as Coloma Corners.

Glover Bluff crater, a meteor crater, is located about 4 miles south of Coloma.

According to the United States Census Bureau, the village has a total area of 1.46 square miles (3.78 km2), all of it land. 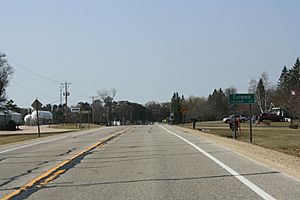 There were 184 households, of which 33.7% had children under the age of 18 living with them, 46.7% were married couples living together, 10.3% had a female householder with no husband present, 8.2% had a male householder with no wife present, and 34.8% were non-families. 29.3% of all households were made up of individuals, and 20.1% had someone living alone who was 65 years of age or older. The average household size was 2.45 and the average family size was 2.94.

All content from Kiddle encyclopedia articles (including the article images and facts) can be freely used under Attribution-ShareAlike license, unless stated otherwise. Cite this article:
Coloma, Wisconsin Facts for Kids. Kiddle Encyclopedia.