Colorado City is a town in Mohave County, Arizona, United States, and is located in a region known as the Arizona Strip. According to the 2010 census, the population of the town was 4,821. At least three Jesus Christ of Latter Day Saint fundamentalist sects are said to have been based there. A majority of residents and many local officials belong to the most prominent of these sects, the Fundamentalist Church of Jesus Christ of Latter Day Saints, whose corporation also owned much of the land within and around the town until state intervention in the 2000s.

Colorado City, formerly known as Short Creek (or the Short Creek Community), was founded in 1913 by members of the Council of Friends, a breakaway group from the Salt Lake City-based The Church of Jesus Christ of Latter-day Saints (LDS Church). The Council of Friends membership desired a remote location where they could practice plural marriage, which had been publicly abandoned by the LDS Church in 1890. On July 26, 1953, Arizona Governor John Howard Pyle sent troops into the settlement to stop polygamy in what became known as the Short Creek raid. The two-year legal battle that followed became a public relations disaster that damaged Pyle's political career and set a hands-off tone toward the town in Arizona for the next 50 years.

After the death of Joseph W. Musser, the community split into two groups: the Fundamentalist Church of Jesus Christ of Latter-Day Saints stayed in Short Creek, while the Apostolic United Brethren relocated to Bluffdale, Utah. The FLDS changed the name of the community to Colorado City (on the Arizona side of the border) and Hildale (on the Utah side) to eliminate any ties to the Short Creek raids.

In January 2004, the local FLDS fundamentalist leader, Warren Jeffs, expelled a group of 20 men, including the mayor, while the men expelled claimed they were penalized for disagreeing with Jeffs. Observers stated that this was the most severe split to date within the community other than the split between Colorado City and Centennial Park. According to the Utah attorney general's office, this was not the first time Jeffs was accused of expelling men from the community; as many as 400 young men are estimated to have been expelled by Jeffs from 2001–2006. Most were removed for failing to follow Jeffs' rules, or for dating women without his permission. Many of these expelled men and boys were very naïve and sheltered, often wound up homeless in nearby towns such as Hurricane, Utah and St. George, Utah. Jeffs was placed on the FBI's Ten Most Wanted list and eventually arrested on August 28, 2006.

Most of the property in the town was owned by the United Effort Plan, a real estate trust of the FLDS. In 2007 the state authorities began dismantling church ownership of Colorado City lands. The FLDS church retaliated and indoctrinated their followers against the state, believing they were being targeted because of their beliefs. The FLDS followers became further secluded as a result. Most of the remaining FLDS view their leader, Warren Jeffs, as a martyr.

On April 6, 2010, law enforcement officials in Mohave County, Arizona, and Washington County, Utah, served five search warrants seeking records from town officers. As a result of the initial warrants, the Hildale-Colorado City Department of Public Safety was shut down, and emergency responders were prohibited from responding to calls without the approval of county officials. Firefighter Glen Jeffs indicated that the warrants referenced "misuse of funds."

In response to a civil rights lawsuit by the United States Justice Department alleging that the Colorado City government, including law enforcement, was taking orders from the FLDS Church, Arizona Attorney General Tom Horne announced in July 2012 that he was allocating funding to allow the Mohave County Sheriff's Department to provide daily patrols in the town.

On March 20, 2014, a jury hearing the case of Cooke et al v. Colorado City, Town of et al ruled that the towns of Colorado City and Hildale had discriminated against Ronald and Jinjer Cooke because they were not members of the FLDS Church. The Cookes were awarded $5.2 million for "religious discrimination". The Cooke family moved to the Short Creek area in 2008 but were refused access to utilities by the towns of Colorado City and Hildale. As a result of the ruling, Arizona's Attorney General Tom Horne issued a press release stating that he "wants to eradicate discrimination in two polygamous towns" and believes that the court ruling will give him the tools to do it. 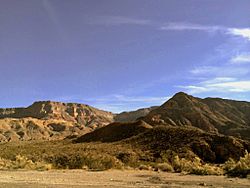 Of the 444 households, 83.1% had children under the age of 18 living with them, 85.8% were married couples living together, 3.6% had a female householder with no husband present, and 5.9% were non-families. 4.1% of all households were made up of individuals, and 1.1% had someone living alone who was 65 years of age or older. The average household size was 7.51 and the average family size was 7.58. Colorado City had the fourth-highest household size in the nation, based on the 2012 5-Year American Community Survey count of an average household size of 8.04 people by zip code tabulation area.

The Colorado City/Hildale, Utah area has the world's highest incidence of fumarase deficiency, an extremely rare genetic condition which causes severe intellectual disability. Geneticists attribute this to the prevalence of cousin marriage between descendants of two of the town's founders, Joseph Smith Jessop and John Y. Barlow; at least half the area's roughly 8,000 inhabitants are descended from one or both. 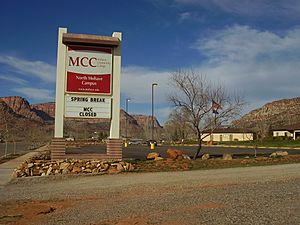 The Arizona state government attempted to take over the district in 2005 due to mismanagement.

In addition to the district public school, there is a charter school, Masada Charter School, serving students in grades K–9. The charter school is outside of the Colorado City town limits in the community of Centennial Park.

All content from Kiddle encyclopedia articles (including the article images and facts) can be freely used under Attribution-ShareAlike license, unless stated otherwise. Cite this article:
Colorado City, Arizona Facts for Kids. Kiddle Encyclopedia.