The Commander-in-Chief, Portsmouth, was a senior commander of the Royal Navy for hundreds of years. The commanders-in-chief were based at premises in High Street, Portsmouth from the 1790s until the end of Sir Thomas Williams's tenure, his successor, Sir Philip Durham, being the first to move into Admiralty House at the Royal Navy Dockyard, where subsequent holders of the office were based until 1969. Prior to World War I the officer holder was sometimes referred to in official dispatches as the Commander-in-Chief, Spithead.

The Command extended along the south coast from Newhaven in East Sussex to Portland in Dorset. In 1889 the Commander-in-Chief took HMS Victory as his Flagship.

An admiral commanding in Portsmouth has been attested as early as 1697, but the first Flag Officer who records clearly establish was responsible for Portsmouth was Rear-Admiral Sir John Moore, appointed in 1766. The Command extended along the south coast from Newhaven in East Sussex to Portland in Dorset. In 1889 the Commander-in-Chief took HMS Victory as his Flagship. 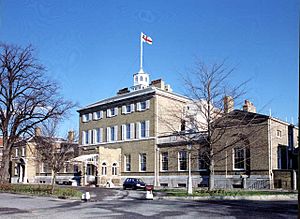 In the late 18th century port admirals began to reside ashore, rather than on board their flagships; the Commander-in-Chief, Portsmouth was provided with a large house in the High Street (formerly home to one Philip Varlo, four times Mayor of Portsmouth). In the 1830s this Admiralty House was sold to the War Office (as Government House, it went on to house the Lieutenant-Governor of Portsmouth for the next fifty years). The Commander-in-Chief moved in turn into the former Dockyard Commissioner's house, which still stands within HMNB Portsmouth.

During the Second World War the Command Headquarters was at Fort Southwick.

In 1952 the Commander-in-Chief took up the NATO post of Commander-in-Chief, Channel (CINCHAN). This move added Allied Command Channel to the NATO Military Command Structure. The admiral commanding at Portsmouth had control naval operations in the area since 1949 under WUDO auspices.

In 2012 the appointment of separate Commanders-in-Chief was discontinued with full operational command being vested in the First Sea Lord.

All content from Kiddle encyclopedia articles (including the article images and facts) can be freely used under Attribution-ShareAlike license, unless stated otherwise. Cite this article:
Commander-in-Chief, Portsmouth Facts for Kids. Kiddle Encyclopedia.