CompactFlash (CF) is a flash memory mass storage device used mainly in portable electronic devices. The format was specified and the devices were first manufactured by SanDisk in 1994.

CompactFlash became the most successful of the early memory card formats, surpassing Miniature Card and SmartMedia. Subsequent formats, such as MMC/SD, various Memory Stick formats, and xD-Picture Card offered stiff competition. Most of these cards are smaller than CompactFlash while offering comparable capacity and speed. Proprietary memory card formats for use in professional audio and video, such as P2 and SxS, are faster, but physically larger and more costly.

In November 2010, SanDisk, Sony, and Nikon presented a next generation card format to the CompactFlash Association. The new format has a similar form factor to CF/CFast but is based on the PCI Express interface instead of Parallel ATA or Serial ATA. With potential read and write speeds of 1 Gbit/s (125 MByte/s) and storage capabilities beyond 2 TiB the new format is aimed at high-definition camcorders and high-resolution digital cameras, but the new cards are not backward compatible with either CompactFlash or CFast. The XQD card format was officially announced by the CompactFlash Association in December 2011. 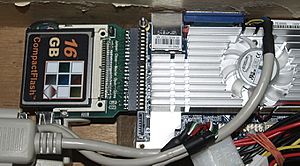 A 16-GB CompactFlash card installed in a 2.5" IDE port with adapter

There are two main subdivisions of CF cards, 3.3 mm thick type I and 5 mm thick type II (CF2). The type II slot is used by miniature hard drives and some other devices, such as the Hasselblad CFV Digital Back for the Hasselblad series of medium format cameras. There are four main card speeds: original CF, CF High Speed (using CF+/CF2.0), faster CF 3.0 standard, yet faster CF 4.0 standard adopted as of 2007.

CompactFlash was originally built around Intel's NOR-based flash memory, but has switched to NAND technology. CF is among the oldest and most successful formats, and has held a niche in the professional camera market especially well. It has benefited from both a better cost to memory-size ratio and, for much of the format's life, generally greater available capacity than other formats.

CF cards can be used directly in a PC Card slot with a plug adapter, used as an ATA (IDE) or PCMCIA storage device with a passive adapter or with a reader, or attached to other types of ports such as USB or FireWire. As some newer card types are smaller, they can be used directly in a CF card slot with an adapter. Formats that can be used this way include SD/MMC, Memory Stick Duo, xD-Picture Card in a Type I slot, and SmartMedia in a Type II slot, as of 2005. Some multi-card readers use CF for I/O as well.

There are ComactFlash devices of different capacities.

All content from Kiddle encyclopedia articles (including the article images and facts) can be freely used under Attribution-ShareAlike license, unless stated otherwise. Cite this article:
CompactFlash Facts for Kids. Kiddle Encyclopedia.