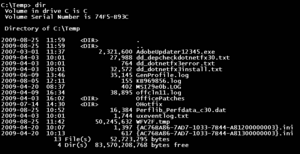 The underlying storage mechanism usually has no concept of a file. A hard disk knows of disk blocks, which are numbered in a certain way. These disk blocks contain binary data (usually: large numbers).

The file system does the translation between the large numbers, and the view the users see, that is that of files, organized in a certain way.

More recently, concepts from databases have been used to develop file systems. That way, there are two different kinds of data:

It then becomes possible to always keep the file system in a consistent state. With databases, this is known as ACID. That way, an operation on a file is either done, or it is not done. There are however, no states in between. The file being written to the filesystem is no longer visible. This is usually done using transactions. But with filesystems, it is called journaling.

All content from Kiddle encyclopedia articles (including the article images and facts) can be freely used under Attribution-ShareAlike license, unless stated otherwise. Cite this article:
File system Facts for Kids. Kiddle Encyclopedia.