Comparison of the Imperial and US customary systems facts for kids

Both the imperial and United States customary systems of measurement derive from earlier English systems used in the Middle Ages, that were the result of a combination of the local Anglo-Saxon units inherited from German tribes and Roman units brought by William the Conqueror after the Norman Conquest of England in 1066.

Having this shared heritage, the two systems are quite similar, but there are differences. The US customary system is based on English systems of the 18th century, while the Imperial system was defined in 1824, after American independence.

The main difference is in units of volume. The American system has two gallons: a wet and a dry one. The imperial gallon is bigger than each of these. However, the imperial fluid ounce is slightly smaller than the American one. 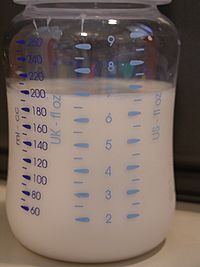 A baby bottle with measurements in metric, imperial and US customary

The international yard is exactly 0.9144 metres. This definition was agreed upon by the United States, Canada, the United Kingdom, South Africa, Australia and New Zealand in 1959. However, the United States continued to use its old length units for surveying purposes. The US survey foot is exactly 36/39.37 metre. 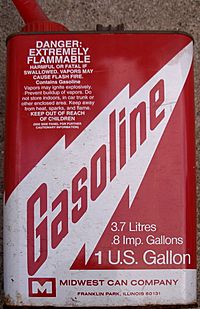 Another difference is in units of mass. In Britain people often use the stone. One stone is 14 pounds. Eight stones are one hundredweight (112 lb). Twenty hundredweights are one ton. So one British ton is 2240 pounds. It is very close to the tonne of the metric system.

All content from Kiddle encyclopedia articles (including the article images and facts) can be freely used under Attribution-ShareAlike license, unless stated otherwise. Cite this article:
Comparison of the Imperial and US customary systems Facts for Kids. Kiddle Encyclopedia.