Complementary colors are pairs of opposite colors. What is meant by opposite can be different between color science, and art and the printing process.

In color science "complementary colors" are colors opposite to each other on the color wheel. Primary colors and secondary colors are typically paired in this way:

If a person stares at a single color for about a minute then looks at a white surface, an afterimage of the complementary color will appear. This is because of eye fatigue. For example, if the person stares at a red color, the photoreceptors (cells in the eye which catch colored light) for red light in the retina (the back part of the eye) become fatigued. When photoreceptors are fatigued they are less able to send information to the brain. If the person then looks at white light, all photoreceptors will send information. Because the photoreceptors for red light are fatigued, the information they send will not be as strong as the information about the colors other than red and the illusion of seeing the complementary color is created. 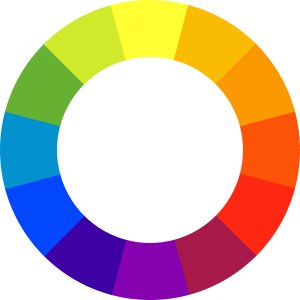 a Blue-Yellow-Red color wheel. Opposite colors are called complementary.

Because of the limited range of colors that was available throughout most of the history of art, many artists still use a traditional set of complementary pairs, including:

The complement of each primary color (red, blue, or yellow) is roughly the color made by mixing the other two in a subtractive system (red + blue = purple; blue + yellow = green; red + yellow = orange). When two complements are mixed they produce a gray or brown.

All content from Kiddle encyclopedia articles (including the article images and facts) can be freely used under Attribution-ShareAlike license, unless stated otherwise. Cite this article:
Complementary color Facts for Kids. Kiddle Encyclopedia.