Complexe Maisonneuve is an office building complex in Montreal, Quebec, Canada. Complexe Maisonneuve is located on De la Gauchetière Street West between University Street and Beaver Hall Hill. It is situated facing Victoria Square in the Quartier international district of Downtown Montreal, and is linked to Montreal's Underground City and Square-Victoria-OACI Station on the Montreal Metro. The complex consists of two buildings, the Tour de la Banque Nationale and 700 de La Gauchetière. It was inaugurated on October 31, 1983. The two towers share an underground base six floors deep.

The complex was designed by American architect Sylvia Gottwald-Thapar in the modernist architectural style, and is the only all-steel structure built in Montreal since the 1960s.

The building is home to the headquarters of the National Bank of Canada and Raymond Chabot Grant Thornton. 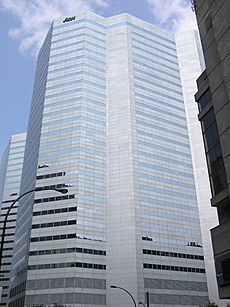 All content from Kiddle encyclopedia articles (including the article images and facts) can be freely used under Attribution-ShareAlike license, unless stated otherwise. Cite this article:
Complexe Maisonneuve Facts for Kids. Kiddle Encyclopedia.