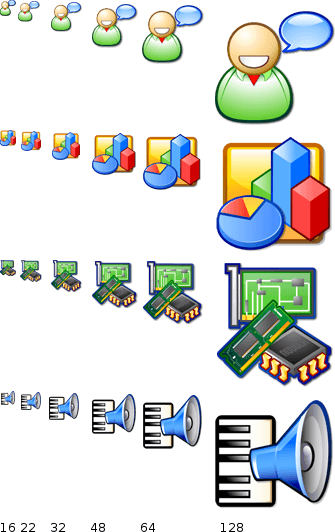 Nuvola icons for KDE are in PNG format and come in six sizes.

A computer icon is a small pictogram, usually ranging from 16 by 16 pixels up to 128 by 128 pixels, which represents a file, folder, application or device on a computer operating system. Icons were first developed as a tool for making computer interfaces easier for novices to grasp in the 1970s at the Xerox Palo Alto Research Center facility. Icon-driven interfaces were later popularized by the Apple Macintosh and Microsoft Windows operating environments.

Icons may also be found on the toolbars and in the menus of computer application software such as Microsoft Word.

Virtually every major computer operating system has the ability to use an icon-based graphical user interface (GUI) to display information to end users.

Most computer functions in a GUI are represented by a function icon. Placing the cursor on the icon, and clicking (or double-clicking) a mouse, trackball or other button usually starts the function or program.

The creation of a good function icon can be considered as an art form in itself, comparable to that practiced in the past in the domain of miniature painting by old masters such as Joseph Severn and Charles-Francois Daubigny.

The icon must be original, distinctive, and tiny and it must be useful on a wide variety of monitors set at different resolutions. This work is further complicated by the need to create several sets of function icons for several types of views in several types of operating systems, for any given program. For instance, the GUI guidelines in one operating system might specify the need to create sets of 16, 32, and 48 pixel icons for any program while the GUI guidelines in another system might specify sets of 16, 24, 48 and 96 pixel icons for any program.

In certain views of folders or directories in a GUI all the documents or files are represented as icons, in addition to their file name and, in certain cases, other details. In most systems and for most files these icons are generic images, representing the program used to create the file, or the file type. In this case, the comments made in the previous paragraph concerning the icon as an art form also apply to file icons.

In the case of graphic files most modern systems replace the generic icon with a reduced image of the graphic. This reduced image usually fits into a 128 by 128 or a 117 by 117 pixel box, depending on the operating system used. It is available in a "thumbnail view" or within some other specialized viewing area on the screen.

The most recent systems and the most recent applications often generate such reduced images from other types of files in programs which have not been traditionally viewed as "graphics," such as word processor software, text files, or business presentation programs such as Agnubis, Impress, or PowerPoint.

An Icon library, or "ICL", is a way to package icons. An ICL is a NE format Windows binary with ICON resources representing the packaged icons.

An icon, when talked about in computing, is a picture which usually stands for a computer program, computer file, folder, or an action for a program to do. Icons are usually small pictures, but not always. Sometimes the user can change what size an icon is. 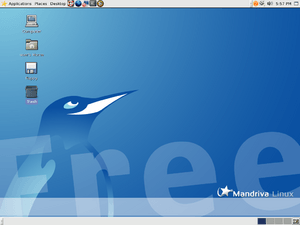 Icons are used in many places on a computer. The desktop contains icons as shortcuts - clicking on these icons opens up the file, folder, or application that they stand for. For example, in Microsoft Windows the desktop will often have an icon for the Recycle Bin, and the icon usually looks like a trash can.

Shortcut icons also show up in other places such as folders and the start menu. These icons work the same as on the desktop.

Many computer programs use icons on buttons. When the user clicks on the button, something happens. For example, a button with an icon of a printer will usually help the user print what is currently open. While a button with a magnifying glass will let the user search for something.

All content from Kiddle encyclopedia articles (including the article images and facts) can be freely used under Attribution-ShareAlike license, unless stated otherwise. Cite this article:
Computer icon Facts for Kids. Kiddle Encyclopedia.