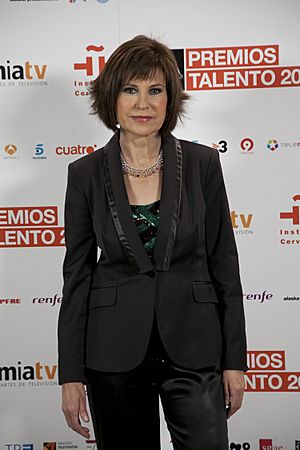 Campoy was born on 28 October 1958 in Terrassa, Catalonia, Spain. She was raised in Ibiza, Spain. Campoy was divorced two times. Her first marriage was with Jaime Roig. She was also married to Lorenzo Díaz. Campoy had an affair with movie producer Andrés Vicente Gómez. She had two children. Campoy died on 10 July 2013 in Valencia, Spain from liver failure caused by leukemia, aged 54. She was cremated and her ashes was scattered off the coast of Ibiza.

All content from Kiddle encyclopedia articles (including the article images and facts) can be freely used under Attribution-ShareAlike license, unless stated otherwise. Cite this article:
Concha García Campoy Facts for Kids. Kiddle Encyclopedia.