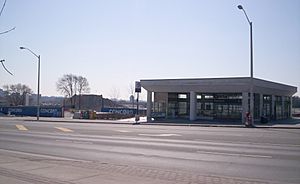 Bessarion station is adjacent to the development site in the northwest

Southwest view of the site 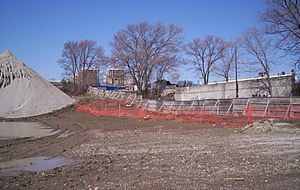 Construction site as of April 2008 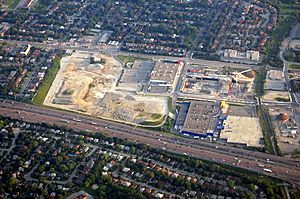 Until the 1960s, the site was used as farmland. At that time Canadian Tire built a large distribution facility and retail store on the site. The buildings were surrounded by single-family homes built in the 1950s and 1960s. In 1999 Canadian Tire began the process of moving the Distribution Centre to Brampton, Ontario, and the retail store was relocated to nearby Provost and Sheppard Avenue East. Canadian Tire then sold the site to the development company Concord Adex. Demolition of the old buildings began in 2007.

In 2015 the first phase of the development was completed, consisting of four buildings – Discovery (buildings A, B) and Discovery II (buildings D, E) – located to the north of an IKEA store. An 8-acre (3.2 ha) park was in the design stages.

Upon completion, Concord Park Place will include 5,000 condominium units in 20 buildings, high-rise, and mid-rise. The remaining 16 buildings will be located on the former footprint of the old Canadian Tire warehouse and store to the west of Provost Drive.

Concord Park Place is near the Leslie and Bessarion subway stations on the Sheppard subway line. IKEA operates a shuttle service from the store to Leslie station.

Highway 401, Highway 404/Don Valley Parkway and Sheppard Avenue are the major routes near the site.

GO Transit's Oriole station is located under Highway 401 with an access road on Leslie Street. The station is a stop on the Richmond Hill line.

Within the development are a number of new or expanded local roads. Esther Shiner Boulevard connects Old Leslie Street and Provost Drive to Leslie Street; the portion from Provost to railway underpass used to be the main driveway to the IKEA store. Provost Drive has been extended under railway line to meet with Esther Shiner Boulevard and extends to the rear of the IKEA store.

The developers have incorporated publicly-visible art into their buildings. For example, one of the towers displays a large installation by artist James Lahey, "Toronto Tree Blossoms", in the corner glass.

In 2016 the German artist Achim Zeman applied an installation at Tango 2 named "Straight Forward", which covered the entrance and part of the building as well. The porte cochère and the fitness studio at the ground floor were packed with translucent aqua-toned strips. The view of the interior was obscured by the many horizontal strips: "For those on the sidewalk, movement in the gym can be seen through the windows—and a curious passerby could press their nose up to the glass to look through a gap if they felt they just had to—but the colourful work mostly makes abstract the details behind it, affording some privacy for those running on the treadmills." Above the ground floor Zeman covered the building with strips in various shades of blue and turquoise, as if the blue sky was reflected on its surface. In order to see the whole installation, the viewer had to move around the space.

All content from Kiddle encyclopedia articles (including the article images and facts) can be freely used under Attribution-ShareAlike license, unless stated otherwise. Cite this article:
Concord Park Place Facts for Kids. Kiddle Encyclopedia.