Jews first came to San Diego in 1850, and organized High Holiday services each year. In 1861, led by Marcus Schiller, they organized a congregation called "Adath Yeshurun". In early 1887 they formally incorporated under the name "Beth Israel". 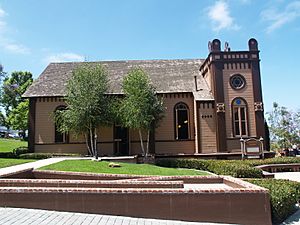 Beth Israel's first building still stands in Heritage Park, which is adjacent to Old Town San Diego State Historic Park. The wooden building was erected in 1889 at Second Avenue and Beech Street, in the wake of a boom in economic activity and population that resulted from the November 1885 completion of the California Southern Railroad connecting San Diego to the Atlantic and Pacific Railroad in Barstow, California. Services were first held there on September 25, 1889. One of the oldest synagogue buildings in the American West, it was used by the Congregation until 1926, when the Congregation moved to its second, larger building at Third and Laurel. At the time the congregation numbered around 60 families.

The Third and Laurel site occupied a full city block, and included a number of structures. In addition to the synagogue building, there was an adjacent social hall, a school building, and a number of small apartments. When the congregation moved in early 2001, it retained the school and social hall.

All content from Kiddle encyclopedia articles (including the article images and facts) can be freely used under Attribution-ShareAlike license, unless stated otherwise. Cite this article:
Congregation Beth Israel (San Diego) Facts for Kids. Kiddle Encyclopedia.