These terms describe two classes of an electrocyclic reaction (a type of organic chemical reactions). In a conrotatory mode, the substituents located at the ends of a conjugated double bond system move in the same (clockwise or counterclockwise) direction during ring opening or ring closure. In a disrotatory mode, they move in opposite directions.

An example is the conversion of trans-cis-trans-2,4,6-octatriene to cis-dimethylcyclohexadiene (top of figure). The orbital mechanics of the reaction needs a disrotatory mode. The orbital symmetry of the octatriene's highest occupied molecular orbital (HOMO) requires for the end pi orbitals to move in opposite directions to form the correct symmetry found in the sigma bond. 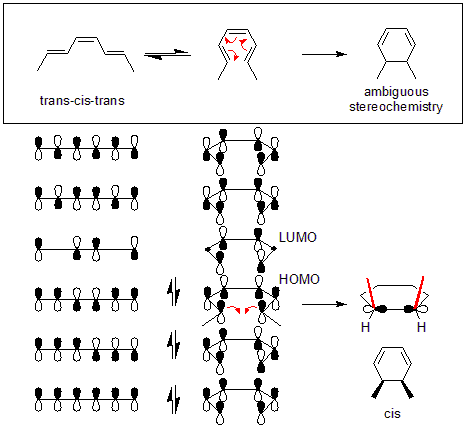 The Woodward–Hoffmann rules summarize the above different reactions.

The following picture also shows the difference between conrotatory and disrotatory reactions:

Conrotatory and disrotatory modes of rotation each showing two possible directions of rotation that result in pairs of enantiomers for a generic hexatriene system.

All content from Kiddle encyclopedia articles (including the article images and facts) can be freely used under Attribution-ShareAlike license, unless stated otherwise. Cite this article:
Conrotatory and disrotatory Facts for Kids. Kiddle Encyclopedia.