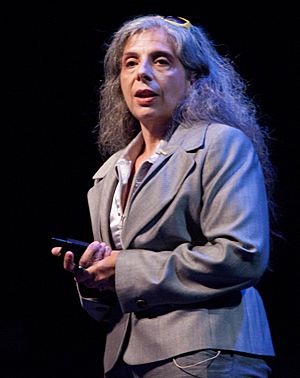 Adams presenting at TEDxHouston in June 2011

Constance Adams (1964/65 – June 25, 2018) was an American space architect. He worked in the space program. In the late 1990s she was employed by Lockheed Martin Space Operations, to support the NASA’s Mars exploration research efforts at the Johnson Space Center in Houston, Texas. Among other projects, Adams was involved in developing the Lockheed-Martin design of an inflatable module for the International Space Station.

All content from Kiddle encyclopedia articles (including the article images and facts) can be freely used under Attribution-ShareAlike license, unless stated otherwise. Cite this article:
Constance Adams Facts for Kids. Kiddle Encyclopedia.