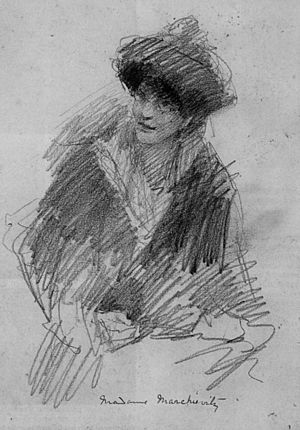 She was the first woman elected to the British House of Commons, but she did not take her seat. Instead she and the other Sinn Féin TDs formed the first Dáil Éireann. She is well known for founding Cumann na mBan.

She was also the first woman in Europe to be a cabinet minister, She was Minister of Labour of the Irish Republic between 1919 and 1922.

All content from Kiddle encyclopedia articles (including the article images and facts) can be freely used under Attribution-ShareAlike license, unless stated otherwise. Cite this article:
Constance Georgine, Countess Markiewicz Facts for Kids. Kiddle Encyclopedia.