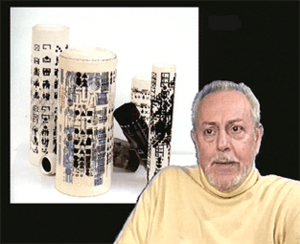 His work were written script, in particular the Hebrew alphabet, symbols and codes of everyday life such as traffic signs, chemical symbols, Egyptian hieroglyphics and letters from the Greek, Phoenician and Arabic alphabets.

He was born in Cairo. He spent his career in Paris. His work is held in the National Gallery of Greece and the Macedonian Museum of Contemporary Art.

He was made a Chevalier of the Order of Arts and Letters in 1986.

All content from Kiddle encyclopedia articles (including the article images and facts) can be freely used under Attribution-ShareAlike license, unless stated otherwise. Cite this article:
Constantin Xenakis Facts for Kids. Kiddle Encyclopedia.