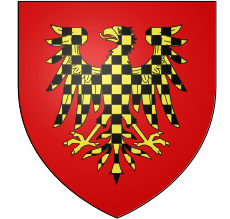 Coat of arms of the Conti di Segni.

The Conti di Segni (de Comitibus Signie, also known as Conti or De Comitibus for short) were an important noble family of medieval and early modern Italy. They came from Segni, Lazio. Many members of the family served as military commanders or religious leaders, including many cardinals and four popes.

Torquato Conti (1591–1636) served as a General-Field Marshal of the Holy Roman Empire during the Thirty Years' War. His cruelty earned him the nickname The Devil.

The family eventually became divided into many branches. The two main branches were the counts of Segni and Valmontone, and the dukes of Poli and Guadagnolo.

All content from Kiddle encyclopedia articles (including the article images and facts) can be freely used under Attribution-ShareAlike license, unless stated otherwise. Cite this article:
Conti di Segni Facts for Kids. Kiddle Encyclopedia.