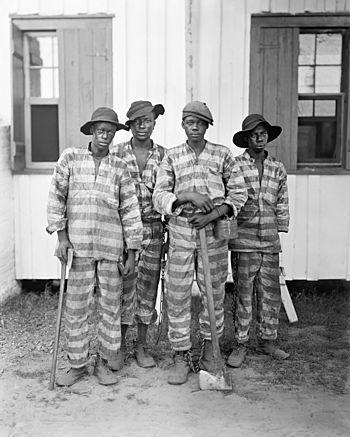 Young prisoners leased to cut timber in Florida, around 1900

Convict leasing was a form of forced labor that prisons in the Southern United States. ("Convict" is a rude word for "prisoner"; leasing is like renting something.) Under the system, prisons leased prisoners out as free workers to corporations, business owners, and plantation owners. Basically, the prisons were selling prisoners like slaves, except that they were not sold forever.

In 1898, for example, about 73% of Alabama's entire yearly state revenue came from convict leasing. For this reason, convict leasing lasted almost 100 years in the South.

The state of Louisiana leased out convicts as early as 1844. However, convict leasing began to spread throughout the South during the Reconstruction Era (1865–1877). This was just after the end of the American Civil War, which ended slavery. With no more slaves to work for them, Southern farmers and businessmen needed to find new workers. Southern legislatures passed laws called Black Codes to keep blacks from moving freely and to force them to work for whites. As historian Douglas Blackmon explains:

At this time, the Southern states did not have much money, and they found that convict labor gave them a big source of revenue. Contractors also made money off the system because they did not have to pay the prisoners the wages they would have to pay to white workers. The Thirteenth Amendment to the United States Constitution had made slavery illegal – except as punishment for a crime. So the states passed laws that would make it easy to convict innocent black people of crimes. Once they were prisoners, they could be treated like slaves. The states basically used this process as a way to continue slavery in the South.

Northern states sometimes contracted for prison labor. However, in the South, the state gave complete control of prisoners to contractors.

Also, according to historian Matthew Mancini, the Southern convict labor system was "one of the harshest and most exploitative labor systems known in American history." 'If one [prisoner] dies, get another' was the attitude of many contractors, Mancini writes. He says this was caused by corruption, racism, racial violence, and the fact that contractors could do whatever they wanted without getting into trouble.

Prisoners were often treated very badly. Unlike during slavery, the contractors had not paid very much for the prisoners, and they would not have them forever. For these reasons, contractors had very little Prisoners could be beaten or whipped if their bosses did not think they were working hard enough. They were abused by guards. One source says: "Mines and plantations that used convict laborers commonly had secret graveyards containing the bodies of prisoners who had been beaten and/or tortured to death.

Almost all of the prisoners who were leased out were African Americans, mostly adult males. This was because laws were enforced much more against black people, and blacks usually got much more severe sentences for "crimes" because of racism.

U.S. Steel is one of the American companies which have admitted using African-American leased convict labor.

Convict leasing was most common around 1880. It was formally outlawed by the last state (Alabama) in 1928. However, it continued in different forms until President Franklin D. Roosevelt made it illegal on December 12, 1941.

The system in different states

Here are some examples of different states' convict leasing systems.

Effects on the prison population

Scholar Randall Shelden argues that the convict lease system created an incentive to convict black people. Because the convict lease system brought in so much money, the states and counties had a reason to want to convict African-Americans. This is why the people in Southern prisons became mostly African-American after the Civil War, Sheldon writes. For example, in Louisiana's main prison in Nashville:

During the times when Southern states used the convict leasing system, their prison populations grew across the South. For example:

All content from Kiddle encyclopedia articles (including the article images and facts) can be freely used under Attribution-ShareAlike license, unless stated otherwise. Cite this article:
Convict lease Facts for Kids. Kiddle Encyclopedia.