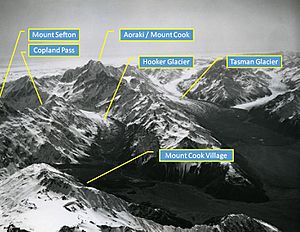 Location of Copland Pass in the Southern Alps 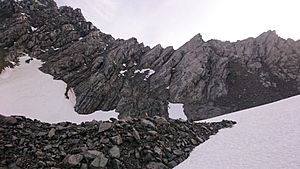 The western side of Copland Pass 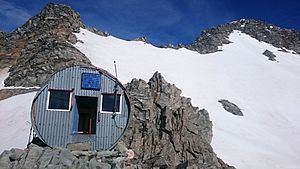 Copland Shelter on the eastern side of the pass at elevation 1,960 m

The Copland Pass (el. 2,150 metres or 7,050 feet) is an alpine pass in the Southern Alps of New Zealand. Known as Noti Hinetamatea by the indigenous Ngāi Tahu, the pass follows the route of the Makaawhio ancestor Hinetamatea and her sons Tātāwhākā and Marupeka.

The Copland River on the western side of the Main Divide may have been named by the surveyor J. G. Roberts for Dr James Copland, an early settler in Otago. Edward FitzGerald and Matthias Zurbriggen crossed the Main Divide just 500 metres (1,600 ft) further south in February 1895 and that pass, with an elevation of 2,109 metres (6,919 ft), has been named FitzGerald Pass. A month later, the mountaineer Arthur Paul Harper was the first non-Māori man to cross the slightly higher Copland Pass (2,150 metres or 7,050 feet) and he named it for the main river draining its western side. Jane Thomson was the first non-Māori woman to cross the pass in 1903.

Since the mid-1990s, the eastern climb towards the pass has experienced heavy erosion, and the Copland Pass has become extremely difficult to climb. The Department of Conservation advises that only parties with a "high level of mountaineering experience and appropriate mountaineering equipment" should attempt the crossing, and that numerous fatalities have occurred over the years. Furthermore, crossings should only be attempted from east to west. The Hooker Hut on the eastern side of the pass, which was on the traditional route for the crossing, is no longer accessible, but is stranded on an eroding moraine.

All content from Kiddle encyclopedia articles (including the article images and facts) can be freely used under Attribution-ShareAlike license, unless stated otherwise. Cite this article:
Copland Pass Facts for Kids. Kiddle Encyclopedia.