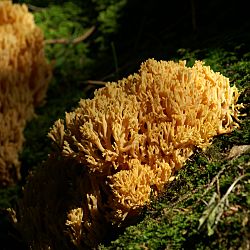 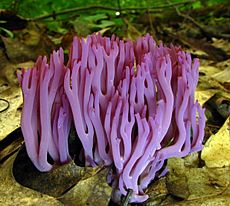 Coral fungi or clavarioid fungi, are mushrooms that are usually shaped like coral, but can also be shaped like forks, worms or clubs. They are rubbery and at times are brightly coloured.

Originally, such fungi were put in the genus Clavaria, and called "clavarioid", which means Clavaria-like. It is now known that clavarioid species are not all closely related. Since they are often studied as a group, we keep the informal (non-taxonomic) name of "clavarioid fungi", and it is frequently used in research papers.

Most coral fungi grow on the ground, but some grow on well decayed logs and stumps. They are usually found in forests but some can also be found in fields. They are decomposers.

Although they are not poisonous, some kinds are a laxative and some can cause stomach upset.

All content from Kiddle encyclopedia articles (including the article images and facts) can be freely used under Attribution-ShareAlike license, unless stated otherwise. Cite this article:
Coral fungi Facts for Kids. Kiddle Encyclopedia.