The French term cordon bleu is translated as "blue ribbon". According to Larousse Gastronomique cordon bleu "was originally a wide blue ribbon worn by members of the highest order of knighthood, L'Ordre des chevaliers du Saint-Esprit, instituted by Henri III of France in 1578. By extension, the term has since been applied to food prepared to a very high standard and by outstanding cooks. The analogy no doubt arose from the similarity between the sash worn by the knights and the ribbons (generally blue) of a cook's apron."

The origins of cordon bleu as a schnitzel filled with cheese are in Brig, Switzerland, probably about the 1940s, first mentioned in a cookbook from 1949. The earliest reference to "chicken cordon bleu" in The New York Times is dated to 1967, while similar veal recipes are found from at least 1955. 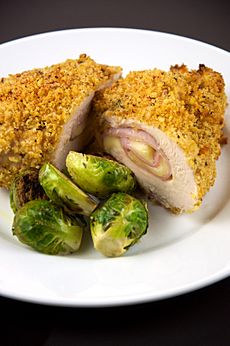 There are many variations of the recipe, all of which involve a cutlet, cheese, and meat. A popular way to prepare chicken cordon bleu is to butterfly cut a chicken breast, place a thin slice of ham inside, along with a thin slice of a soft, easily melted cheese. The chicken breast is then rolled into a roulade, coated in bread crumbs and then deep fried. Other variations exist with the chicken baked rather than fried.

Other common variations include omitting the bread crumbs, wrapping the ham around the chicken, or using bacon in place of ham.

A variant popular in the Asturias province of Spain is cachopo, a deep-fried cutlet of veal, beef or chicken wrapped around a filling of Serrano ham and cheese. In Spain, the version made with chicken is often called san jacobo.

In largely Muslim-populated countries, the halal versions of chicken cordon bleu are also popular, such that the chicken is rolled around beef or mutton instead of pork product.

All content from Kiddle encyclopedia articles (including the article images and facts) can be freely used under Attribution-ShareAlike license, unless stated otherwise. Cite this article:
Cordon bleu (dish) Facts for Kids. Kiddle Encyclopedia.