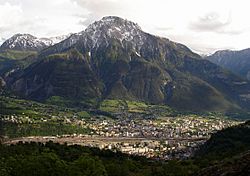 Brig is the capital of the district of Brig in the canton of Valais in Switzerland.

The historic town of 5,000 people is part of the Brig-Glis municipality. The name 'Brig' comes from Briva, or "bridge." Its medieval name was Briga dives. It is a small town in the Swiss canton of the Valais, at the foot of the northern slope of the Simplon Pass, on the right bank of the Saltine stream, and a little above its junction with the Rhone. Its older houses look very Italian. Its buildings were built during the 17th century, because of a single member of the local Stockalper family.

Brig is close to the Swiss-Italian borders. The language used when talking between one another is a unique German dialect, used only in this canton. Brig is popular among winter sport athletes, since it is surrounded by many Alp summits. The town itself is close to Rhone river. Due to the height, the temperatures in winter often remain below zero, resulting in frost. During the summer season, heat can be intense.

The place of meeting in the town is the train station, which links it to other Swiss cities.

The wealth of Brig is because of the Simplon Pass. The opening of the carriage road across the Simplon (1807) and of the tunnel beneath the pass (1906), as well as the fact that above Brig is the steeper and less fertile portion of the Upper Valais (then much frequented by tourists), greatly increased the importance and size of the town.

All content from Kiddle encyclopedia articles (including the article images and facts) can be freely used under Attribution-ShareAlike license, unless stated otherwise. Cite this article:
Brig, Switzerland Facts for Kids. Kiddle Encyclopedia.