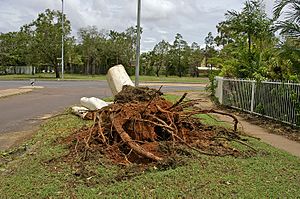 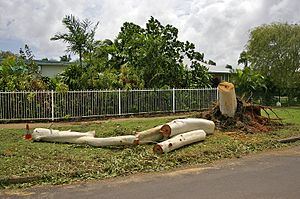 Corymbia bella, commonly known as the ghost gum, weeping ghost gum, or the paper-fruited bloodwood, is a species of tree that is endemic to northern Australia. It has smooth, powdery, white to pale grey bark, lance-shaped adult leaves, flower buds in groups of three, creamy white flowers and cup-shaped, barrel-shaped or urn-shaped fruit.

Corymbia bella was first formally described in 1995 by Ken Hill and Lawrie Johnson from specimens collected 64.5 km (40.1 mi) north of Larrimah in 1998. The specific epithet (bella) is from the Latin word bellus meaning "beautiful", referring to the tree as a whole.

The range of C. bella extends from the Kimberley region of Western Australia across the Northern Territory and northern part of Queensland. It is common in monsoonal areas as far west as Broome and then along the Mitchell Plateau through to Kununurra and Derby. It is then spread across the top end of the Northern Territory from Top Springs to Pine Creek north to Darwin and spreading around the Gulf of Carpentaria. It is then found east from the border from Doomadgee to Cloncurry and Croydon and in the south west of the Cape York Peninsula as far as the lower part of the Mitchell River.

The tree prefers alluvial soils along low lying seasonally wet areas such as flood plains where it comprises part of the woodlands found in these locations. It is also commonly found along creek levees and the edge of swamps and lakes amongst melaleucas and also makes up part of savanah woodland at low point of the plains.

The tree is easily cultivated from seed and grows well in colder climates despite its origins. It is adaptable to most dry or moist well-drained soils in a sunny position and is regarded as hardy, drought and frost tolerant. Although seed can be planted at most times of the year in Australia it is best sown in spring or autumn in temperate climates. The optimum germination temperature for germination is around 18 to 22 °C (64 to 72 °F).

All content from Kiddle encyclopedia articles (including the article images and facts) can be freely used under Attribution-ShareAlike license, unless stated otherwise. Cite this article:
Corymbia bella Facts for Kids. Kiddle Encyclopedia.