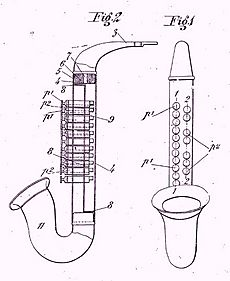 Illustration from the French patent belonging to the manufacturer Couesnon (1924).

The couesnophone, also known as the goofus or queenophone, is a free-reed musical instrument resembling a saxophone. Its reeds vibrate when the desired keys are activated and the player blows through a tube. "Best described as a mouth-blown accordion," "it sounded like a cross between a harmonica and an accordion." French manufacturer Couesnon was awarded the patent no. 569294 in 1924 for an instrument that was described as a saxophone jouet (fr. "toy saxophone"). However, the couesnophone is a polyphonic instrument, while the saxophone is monophonic.

The couesnophone may be held like a saxophone or like a melodica (horizontally), given that the mouthpiece consists of a rubber tube that allows both positions. The keys are set in a layout similar to that of the Hohner early (proper – see [1]) melodicas, i.e. in two parallel rows: one corresponds to the white keys of a piano keyboard, while the other comprises the black keys.

The couesnophone was introduced in jazz music and America by bass saxophonist and vibraphonist Adrian Rollini, though he is sometimes credited with its invention. The term "goofus" might have been coined by jazz musicians such as Rollini, or Ed Kirkeby, because it is easier to pronounce.

Recordings with Rollini on goofus include The Little Ramblers' "Deep Elm"; The Goofus Five's "Everybody Love My Baby" and "Oh! How I Love My Darling"; the Varsity Eight's "How I Love That Girl", "Doo Wacka Doo", "Oh! Mabel", "Happy (Watchin' All the Clouds Roll By)", "Ain't My Baby Grand?", and "I Ain't Got Nobody to Love"; and Joe Venuti and the Eddie Lang Blue Five's "Raggin' the Scale". Don Redman played the goofus on "You'll Never Get to Heaven With Those Eyes", "A New Kind of Man (With a New Kind of Love for Me)", and "Cold Mammas (Burn Me Up)".

All content from Kiddle encyclopedia articles (including the article images and facts) can be freely used under Attribution-ShareAlike license, unless stated otherwise. Cite this article:
Couesnophone Facts for Kids. Kiddle Encyclopedia.