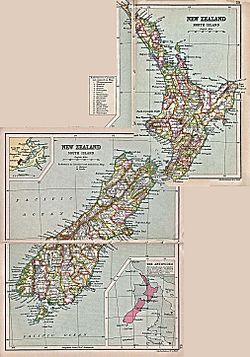 A system of counties of New Zealand was instituted after the country dissolved its provinces in 1876, and these counties were similar to other countries' systems, lasting with little change (except mergers and other localised boundary adjustments) until 1989, when they were reorganised into district and city councils within a system of larger regions.

The "Counties Bill of 1876" was initiated to merge 314 road boards into 39 counties. However, as a result of lobbying the number of counties had grown to 63 by the time the bill was enacted.

They had chairmen, not mayors as boroughs and cities had; many legislative provisions (such as burial and land subdivision control) were different for the counties. By 1966, there were 112 counties.

During the second half of the 20th century, many counties received overflow population from nearby cities. The result was often a merger of the two into a "district" (e.g., Rotorua) or a change of name to "district' (e.g., Waimairi) or "city" (e.g., Manukau).

The Local Government Act 1974 began the process of bringing urban, mixed, and rural councils into the same legislative framework. Substantial reorganisations under that Act resulted in the 1989 local government reforms, which covered the country in (non-overlapping) cities and districts and abolished all the counties except for the Chatham Islands County, which survived under that name for a further six years but then became a "territory" under the "Chatham Islands Council".

The term is perpetuated in the name "Counties-Manukau", which refers to areas of South Auckland and the Franklin District and adjoining districts, and is applied to bodies as diverse as football clubs and health providers.

All content from Kiddle encyclopedia articles (including the article images and facts) can be freely used under Attribution-ShareAlike license, unless stated otherwise. Cite this article:
Counties of New Zealand Facts for Kids. Kiddle Encyclopedia.