A county court is a court based in or with a jurisdiction covering one or more counties, which are administrative divisions (subnational entities) within a country, not to be confused with the medieval system of county courts held by the High Sheriff of each county. 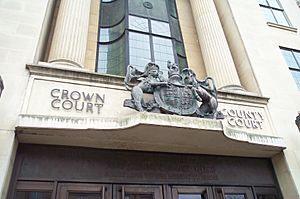 Since 2014, England and Wales have had what is officially described as "a single civil court" named the County Court, with unlimited financial jurisdiction. However it should be understood that there are County Court buildings and courtrooms throughout England and Wales, not one single location. It is "a single civil court" in the sense of a single centrally organised and administered court system. Before 2014 there were numerous separate county court systems, each with jurisdiction across England and Wales for enforcement of its orders, but each with a defined "county court district" from which it took claims. County court districts did not have the same boundaries as counties: the name was used because the county courts had evolved from courts which did in fact correspond to a county's territory. Today the court sits in many County Court centres, currently corresponding to the old individual county courts.

County Court matters can be lodged at a court in person, by post or via the internet in some cases through the County Court Bulk Centre. Cases are normally heard at the court having jurisdiction over the area where the claimant lives. Most matters are decided by a district judge or circuit judge sitting alone. Civil matters in England (with minor exceptions, e.g. in some actions against the police) do not have juries. Judges in the County Court are either former barristers or former solicitors, whereas in the High Court they are more likely to have formerly been a barrister.

Civil claims with an amount in controversy under £10,000 (the Jackson Reforms have increased this from £5,000) are dealt with in the County Court under the small claims track (sometimes known to the lay public as "small claims court," although it is not a separate court). Claims between £5,000 and £25,000 (£15,000 for cases started before April 2009) that are capable of being tried within one day are allocated to the "fast track" and claims over £25,000 (£15,000 for cases started before April 2009) to the "multi track." These 'tracks' are labels for the use of the court system - the actual cases will be heard in the County Court or the High Court depending on their value. For personal injury, defamation, and some landlord-tenant dispute cases the thresholds for each track have different values.

Appeals are to a higher judge (circuit judge hears district judge appeals), the High Court of Justice or to the Court of Appeal, as the case may be.

In debt cases, the aim of a claimant taking County Court action against a defendant is to secure a County Court judgment. This is a legal order to pay the full amount of the debt. Judgments can be enforced at the request of the claimant in a number of ways, including requesting the Court Bailiffs to seize goods, the proceeds of any sale being used to pay the debt, or an Attachment of Earnings Order, where the defendant's employer is ordered to make deductions from the gross wages to pay the claimant.

County Court judgments are recorded in the Register of Judgments, Orders and Fines and in the defendant's credit records held by credit reference agencies. This information is used in consumer credit scores, making it difficult or more expensive for the defendant to obtain credit. In order to avoid the record being kept for years in the register, the debt must be settled within thirty days after the date the County Court judgment was served (unless the judgment was later set aside). If the debt was not fully paid within the statutory period, the entry will remain for six full years.

County court is the name given to the intermediate court in some Australian states (e.g. the County Court of Victoria). They hear indictable (serious) criminal offences except for treason, murder, and manslaughter. Their civil jurisdiction is also intermediate, typically over civil disputes where the amount claimed is greater than a few tens of thousands of dollars but less than a few hundreds of thousands of dollars. The limits vary between states. In some states the same level of court is called a district court. Below them are the magistrates courts. Above them are the state supreme courts. Some states adopt the two-tier appellate system, with the magistrates courts below and the state supreme courts above.

In Northern Ireland there are seven county courts, following the same model as those of England and Wales before unification in 2014. These are the main civil courts. While higher-value cases are heard in the High Court, the county courts hear a wide range of civil actions, consumer claims, and appeals from magistrates' courts. The county courts are called family care centres when hearing proceedings brought under the Children (Northern Ireland) Order 1995 and appeals from the family proceedings courts.

Many United States states have a county court system, which (least common) may be purely administrative (such as in Missouri) focused primarily on registration of properties and deeds or most often, may have jurisdiction over civil cases such as lawsuits and criminal courts and jails (such as in New York, Massachusetts, Pennsylvania, etcetera) where trials from misdemeanors to felony cases are centered about a common jail system managed by the county Sheriffs departments. For example, in Texas, county courts exclusively handle Class A and B misdemeanors (these carry jail time as well as fines), share jurisdiction with justice of the peace and district courts on some mid-size civil cases, and have appellate jurisdiction from municipal and justice of the peace court cases.

With the growth of the largest cities, many large urban centers have subsumed whole or most of counties within the unofficial or official municipal borders, blurring the distinction between the types of government and their jurisdictions in the mind of the common inhabitant, but even television police drama's occasionally point out a county function (Coroners, Sheriffs, Jails, courts, probation departments) are different from a metropolis' police agencies, city governments, and district attorney's (prosecutors) offices (Politically elected or appointed in most of the United States).

In those states with an administrative county court, the body acts as the executive agency for the local government. For example, Harry S. Truman was county judge of Jackson County, Missouri in the 1930s, an executive position rather than a judicial post. The County Commissioners in Pennsylvania and Massachusetts manage the county government, including funding civil and criminal courts, jails and Sheriffs departments overseeing said jails, as well as recording deeds, maintaining county roads and the like. In point of fact, each state has adjusted local governments powers and interactions to suite their own needs, so no one model is uniform even within the same state when the county is interfacing with a major city.

In counties of Tennessee, the primary legislative body was called a county court until the ratification by the voters of the state of the constitutional amendments of 1978, which change the term for this body in all but consolidated city-counties to county commission. Colloquially, the county commission is still frequently referred to as the "county court", particularly in rural areas. (The analgous body in consolidated city-counties is the metropolitan county council, usually shortened to "Metro council".) Likewise, five counties in Oregon are governed by a county court.

In Florida's four-tiered court system, the lower two tiers split original jurisdiction for both criminal and civil matters. broadly speaking, the jurisdiction of "county courts" is limited to misdemeanors and civil actions involving amounts in controversy less than $15,000.00, while the "circuit courts" handle felonies and larger civil cases.

In the states that have a judicial county court, such as New York, it generally handles trials for felonies, as well as appeals of misdemeanors from local courts and some small claims cases. It is a court of original jurisdiction, and thus handles mostly trials of accused felons. The New York County Court "is established in each county outside New York City. It is authorized to handle the prosecution of all crimes committed within the County. The County Court also has limited jurisdiction in civil cases ...." More specifically, the New York County Court is:

Otherwise in the United States, the courts of original jurisdiction in most states have jurisdiction over a particular county, parish, shire, or borough (comparable area entities in the various states of the USA); in other cases, instead of being called "county court" they are called "district courts" or "circuit courts" with a hierarchy of state "superior court" districts up to that state's 'Supreme Court'. Multiple courts of typically limited original jurisdiction within a county are usually called "district courts" or, if located in and serving a particular municipality, "municipal courts"; and are subordinate to the county superior or circuit court. In New York, 'superior'/'circuit' courts are called "supreme court". The court that in other US jurisdictions is called "Supreme Court" is called "Court of Appeal" in New York, Maryland and the District of Columbia.

The Courts of Justice Act 1924 abolished the county courts in the Irish Free State and transferred their jurisdiction (together with that of the quarter sessions) to the Circuit Court. The Circuit Court is still based on the organisational structure established for the county courts and the main administrative officer of each circuit is now called the County Registrar.

County courts continue to exist in Northern Ireland. Civil bills are still used as the initiation document for Circuit Court/county court claims in both Irish jurisdictions, unlike in England and Wales.

All content from Kiddle encyclopedia articles (including the article images and facts) can be freely used under Attribution-ShareAlike license, unless stated otherwise. Cite this article:
County court Facts for Kids. Kiddle Encyclopedia.