Craigellachie (Gaelic: Creag Eileachaidh) is a small village in Moray, Scotland, at the confluence of the River Spey and River Fiddich (whose valley or glen gives its name to the famous Scotch whisky Glenfiddich), in walking distance of the town of Aberlour.

The name means "rocky hill" and was first applied to the cliff on which much of the village is sited, above the River Spey. Craigellachie dates back to at least 1750, when there was a ferry across the Spey where today's village now stands. It also stands at the intersection of the A95 from Keith to Aberlour and the A941 from Rothes to Dufftown.

Craigellachie has two malt whisky distilleries (Craigellachie and The Macallan) and is home to the Speyside Cooperage.

Craigellachie Bridge over the River Spey was built by Thomas Telford in 1814. A plaque on one of the castellated towers guarding the entrance to the bridge records that the metalwork was cast in Wales: another that the bridge was restored to this, something like its original condition, in 1964. The bridge is a remarkable piece of engineering, and can be viewed from above or below.

Craigellachie railway station, closed in 1966, provided a link between the Strathspey Railway and the Morayshire Railway (later the Great North of Scotland Railway).

Craigellachie is an important stopping off point on the Speyside Way, a long distance path from Buckie in the north to Aviemore in the south. 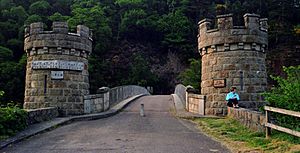 Notable places in Craigellachie include the Fiddichside Inn, Highlander Inn, as well as the Craigellachie Hotel. A notable nearby sight is Balvenie Castle. Many distilleries are in the area and available for touring, including most notably, The Macallan, Aberlour, Glenfiddich and The Glenlivet.

Craigellachie, British Columbia, is named after the Scottish village and is the place where the last spike of the Canadian Pacific Railway was driven in November 1885.

All content from Kiddle encyclopedia articles (including the article images and facts) can be freely used under Attribution-ShareAlike license, unless stated otherwise. Cite this article:
Craigellachie, Moray Facts for Kids. Kiddle Encyclopedia.