Creal Reef Light is an active lighthouse located at Creal Reef, a planar reef about 150 kilometres (93 mi) east of Mackay, Queensland, Australia. It guides ships outgoing from Mackay into Hydrographers Passage, a deep water channel east of Mackay. The structure is a stainless steel tower, which also serves as a daymark and carries a racon. 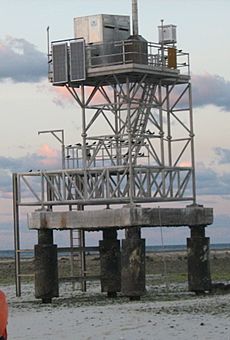 the weather station on Creal Reef

Creal Reef is a middle shelf planar reef with an area of 1.6 square kilometres (0.62 sq mi). It was named in the late 1920s by Captain John A. Edgell (RN) on the survey ship HMAS Moresby, during the Moresby survey of the Cumberland Channel inside the Great Barrier Reef. It was named after Denis A. J. Creal, a pilot with the No. 101 Flight RAAF who assisted the Moresby with her surveys.

The structure, established in April 1985, is a 21 metres (69 ft) stainless steel skeletal tower with a white lantern, standing on a reinforced concrete hut, supported on four piles. The total height from the ground to the top platform is 34.5 metres (113 ft). The light shares the location with an automatic weather station.

All content from Kiddle encyclopedia articles (including the article images and facts) can be freely used under Attribution-ShareAlike license, unless stated otherwise. Cite this article:
Creal Reef Light Facts for Kids. Kiddle Encyclopedia.