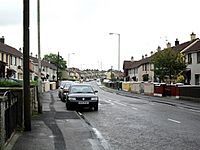 Creggan' (Irish: An Creagán; meaning stony place) is a large housing estate in Derry in Northern Ireland. It is situated on the outskirts of the city and is built on a hill. It is the largest housing estate in the city of Derry in terms of population and not electoral wards, which splits Creggan into three and makes Shantallow the largest ,as that incorporates other housing estates into one, including Galliagh and Carnhill.

The housing estate is very close to the border with County Donegal. The estate is often referred to by people from outside Derry as "the Creggan", this causes anger to those from the Estate as there is no prefix to Creggan.

Creggan was originally built specifically to provide housing for the growing population of Londonderry. There was a Nationalist majority in the city, but the Unionist minority Londonderry Corporation wanted to ensure they kept control of the city. When the Bogside became overcrowded in the 1940s-1960s, the Corporation agreed to put Nationalist and mainly Catholic families in housing, in the same ward as the Bogside. This ensured continued Unionist control of the Londonderry Corporation. This process was known as gerrymandering.

As well as the use of gerrymandering by the Corporation, there was also the use of 'restricted franchise' by the Government, where only rate payers had the right to vote. Usually the male head of a family (or matriarch if the male was dead), the person in whose name the rent book was held, was registered to vote. No other adult in the same household could vote. Middle class and upper class people who owned more than one property in the city had the right to vote more than once.

While this political dimension was important, it was the lack of suitable housing for people, mainly Nationalists, which was the most pressing problem, with married couples living with their parents or with family who had housing in the new estates. This type of social injustice gave rise to the civil rights movement in the city in the 1960s.

The civil rights movement that was occurring in Northern Ireland in the late 60s, took place consistently in Derry. This led to an outbreak of violence between the police, local Unionist Supporters and Nationalists. Violence in the city originally started in the Bogside but quickly spread out to the rest of the city, which included Creggan. One of these occurrences during 12–14 August 1969 became known as the Battle of the Bogside. A disagreement over defending Nationalists from British State forces and elements of Unionism led to a split in the IRA, and the two new paramilitary organizations became known as the Official IRA and Provisional IRA.

In the early years, 1969-72, the Officials were the most prominent in Creggan and the rest of Northern Ireland with militant members such as Joe McCann carrying attacks out on the British Army, even though the Provisionals as a whole were carrying out a more violent campaign along with a bombing campaign in Derry City Centre. Following the introduction of internment without trial being carried out in the British government, the Bogside and Creggan effectively became a no-go area for the British government and was only controlled and policed by both wings of the IRA. This all existed until Operation Motorman in July 1972. After this, the no-go area across Ulster became fully controlled by the British government. However, this did not at all stop violence in the city. In 1972 the Officials called a ceasefire, then in 1974 called an end to their armed campaign. This prompted the creation of the Irish National Liberation Army, a radical left wing group formed of hardliner republicans led by Seamus Costello. By 1972, after Motorman, the British Army conducted large scale operations in the once no-go areas. It caused more open clashes between the British Army, the citizens of Creggan and the rest of Derry. This violence continued to occur up to the early 1990s.

Creggan has experienced a seismic change; long gone are the no-go area and levels of inequality suffered from the 1960s-1980s. It has seen some redevelopment most noticeably with the redevelopment of the Bishop's Field as a sports and recreation area, the introduction of a play park and the development of a country park and fishery at the old reservoir sites at the edge of the estate.

New housing developments have also been completed on the edge of the estate, the largest of these being the new Ballymagowan area.

Schools in the area have also been significantly redeveloped and much investment has gone into providing a first class education for school children from all across Derry.

The area is mistakenly believed to be a stronghold for Dissident Republican activity; however, this is not the case as there is no support for a return to violence among the majority of residents in the estate.

Two wards in Derry have the name Creggan - Creggan Central and Creggan South. (A 3rd smaller ward in part of lower Creggan is 'Beechwood')

Of those living in Creggan Central:

Of those living in Creggan South:

Of 582 wards in Northern Ireland, Creggan Central is the 11th most deprived while Creggan South is ranked 15th.

All content from Kiddle encyclopedia articles (including the article images and facts) can be freely used under Attribution-ShareAlike license, unless stated otherwise. Cite this article:
Creggan, Derry Facts for Kids. Kiddle Encyclopedia.