The Crenarchaeota (also known as Crenarchaea or eocytes) are archaea that have been classified as a phylum of the Archaea domain. Initially, the Crenarchaeota were thought to be sulfur-dependent extremophiles but recent studies have identified characteristic Crenarchaeota environmental rRNA indicating the organisms may be the most abundant archaea in the marine environment. Originally, they were separated from the other archaea based on rRNA sequences; other physiological features, such as lack of histones, have supported this division, although some crenarchaea were found to have histones. Until recently all cultured Crenarchaea had been thermophilic or hyperthermophilic organisms, some of which have the ability to grow at up to 113 °C. These organisms stain Gram negative and are morphologically diverse, having rod, cocci, filamentous and oddly-shaped cells.

One of the best characterized members of the Crenarcheota is Sulfolobus solfataricus. This organism was originally isolated from geothermally heated sulfuric springs in Italy, and grows at 80 °C and pH of 2–4. Since its initial characterization by Wolfram Zillig, a pioneer in thermophile and archaean research, similar species in the same genus have been found around the world. Unlike the vast majority of cultured thermophiles, Sulfolobus grows aerobically and chemoorganotrophically (gaining its energy from organic sources such as sugars). These factors allow a much easier growth under laboratory conditions than anaerobic organisms and have led to Sulfolobus becoming a model organism for the study of hyperthermophiles and a large group of diverse viruses that replicate within them.

Beginning in 1992, data were published that reported sequences of genes belonging to the Crenarchaea in marine environments., Since then, analysis of the abundant lipids from the membranes of Crenarchaea taken from the open ocean have been used to determine the concentration of these “low temperature Crenarchaea” (See TEX-86). Based on these measurements of their signature lipids, Crenarchaea are thought to be very abundant and one of the main contributors to the fixation of carbon . DNA sequences from Crenarchaea have also been found in soil and freshwater environments, suggesting that this phylum is ubiquitous to most environments.

In 2005, evidence of the first cultured “low temperature Crenarchaea” was published. Named Nitrosopumilus maritimus, it is an ammonia-oxidizing organism isolated from a marine aquarium tank and grown at 28 °C. 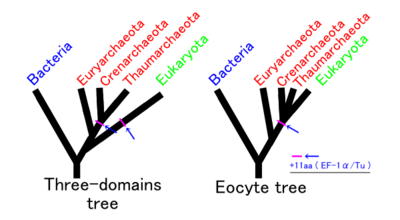 The eocyte hypothesis proposed in the 1980s by James Lake suggests that eukaryotes emerged within the prokaryotic eocytes.

All content from Kiddle encyclopedia articles (including the article images and facts) can be freely used under Attribution-ShareAlike license, unless stated otherwise. Cite this article:
Crenarchaeota Facts for Kids. Kiddle Encyclopedia.