Assembly of histones into a nucleosome

Histones are proteins found in eukaryotic cell nuclei, which package the DNA into structural units called nucleosomes. They are the chief protein components of chromatin, the active component of chromosomes.

Histones act as spools around which DNA winds, and play a role in gene regulation. Without histones, the unwound DNA in chromosomes would be very long. For example, each human cell has about 1.8 meters of DNA, but wound on the histones it has about 90 millimeters of chromatin, which, when duplicated and condensed during mitosis, result in about 120 micrometers of chromosomes.

Histones act as spools around which DNA winds. This packs in the large genomes of eukaryotes to fit inside cell nuclei. The compacted molecule is 40,000 times shorter than an unpacked molecule. 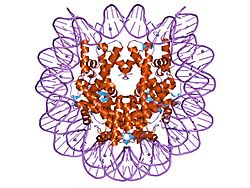 DNA on outside winding round histone on inside. View from top through helical axis

Histones undergo changes which alter their interaction with DNA and nuclear proteins. Long-term changes in histone/DNA interaction cause epigenetic effects. Combinations of modifications are thought to constitute a code, the so-called histone code. Histone modifications act in diverse biological processes such as gene regulation, DNA repair and chromosome condensation (mitosis).

Examples of histone modifications in transcription regulation include:

The discovery of the H5 histone appears to date back to 1970's.

Histones are found in the nuclei of eukaryotic cells, and in certain Archaea, namely Euryarchaea, but not in bacteria. Histone proteins are among the most highly conserved proteins in eukaryotes, which suggests they are vital to the biology of the nucleus. In contrast, mature sperm cells largely use protamines to package their genomic DNA, most likely to achieve an even higher packaging ratio.

Core histones are highly conserved proteins, that is, there are very few differences among the amino acid sequences of the histone proteins of different species. Linker histone usually has more than one form within a species and is also less conserved than the core histones.

All content from Kiddle encyclopedia articles (including the article images and facts) can be freely used under Attribution-ShareAlike license, unless stated otherwise. Cite this article:
Histone Facts for Kids. Kiddle Encyclopedia.