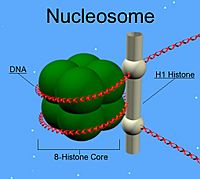 Structure of a nucleosome

Nucleosomes are the building blocks which make up chromosomes. They consist of a segment of DNA wound around a histone protein core.

First, DNA and a protein make up chromatin. Then the chromatin is packed up into nucleosomes. Nucleosomes are then packaged up to make a chromosome. The packages do three things: the chromosomes function in cell division; the very long DNA is wrapped up in a shorter package; and the proteins regulate the gene action in cells.

Nucleosomes form the basic repeating units of eukaryotic chromatin. This packs the large eukaryotic genomes into the nucleus and allows it to be controlled.

In mammalian cells about two metres of linear DNA have to be packed into a nucleus of roughly 10 µm diameter. Nucleosomes are folded, in a series of higher order structures, to form a chromosome. This folding compacts the DNA and adds a layer of regulatory control. The control ensures correct gene expression.

Nucleosomes are thought to carry epigenetically inherited information, as modifications of their core histones. This information can be passed on to daughter cells, but it usually wiped out by meiosis in germ cells.

The nucleosome hypothesis proposed by Don and Ada Olins and Roger Kornberg in 1974, was a big step for understanding eukaryotic gene expression. Kornberg won the Nobel Prize in Chemistry (2006) for this and other discoveries.

Although the nucleosome is a very stable protein-DNA complex, it is not static. It undergoes some structural re-arrangements, such as nucleosome sliding and DNA site exposure. Nucleosomes can inhibit or facilitate transcription.

Since they were discovered in the mid 1960’s, histone changes were thought to affect transcription.

All content from Kiddle encyclopedia articles (including the article images and facts) can be freely used under Attribution-ShareAlike license, unless stated otherwise. Cite this article:
Nucleosome Facts for Kids. Kiddle Encyclopedia.