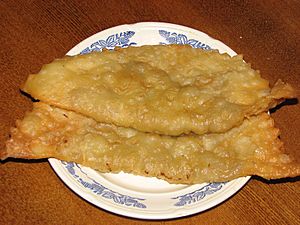 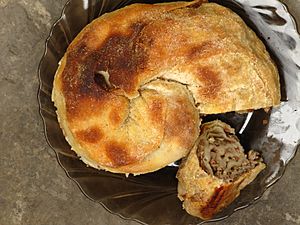 The Crimean Tatar cuisine is primarily the cuisine of the Crimean Tatars, who live on the Crimean Peninsula. The traditional cuisine of the Crimean Tatars has similarities with that of Greeks, Italians, Balkan peoples, Nogays, North Caucasians, and Volga Tatars, although some national dishes and dietary habits vary between different Crimean Tatar regional subgroups; for example, fish and produce are more popular among Yaliboylu and Tat dishes while meat and dairy is more prevalent in Steppe Tatar cuisine. Many Uzbek dishes were incorporated into Crimean Tatar national cuisine during exile in Central Asia since 1944, and these dishes have become prevalent in Crimea since the return. Uzbek samsa, laghman, and plov (pilaf) are sold in most Tatar roadside cafes in Crimea as national dishes. In turn, some Crimean Tatar dishes, including Chiburekki, have been adopted by peoples outside Crimea, such as in Turkey and the North Caucasus.

All content from Kiddle encyclopedia articles (including the article images and facts) can be freely used under Attribution-ShareAlike license, unless stated otherwise. Cite this article:
Crimean Tatar cuisine Facts for Kids. Kiddle Encyclopedia.