The mountain itself is a monadnock, an isolated erosional remnant that rises abruptly from the surrounding plain. Geologically neither Crowders Mountain nor The Pinnacle are true mountains. Crowders Mountain sharply rises some 800 feet (240 m) above the surrounding countryside, and presents sheer rock cliffs that are 100 - 150 feet (46 m) in height. The mountain rises to 1,625 feet (495 m) above sea level. The peak is believed to be the remnant of a much higher mountain which formed some 400 - 500 million years ago and was gradually worn down by the elements. The park sets at the northeast end of the Kings Mountain Range, a 16-mile (26 km) long range of low peaks which include the site of the Battle of Kings Mountain of the American Revolution. 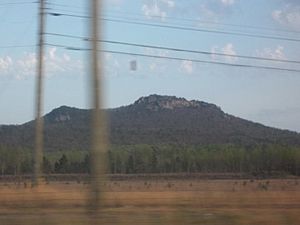 The park features a Visitors Center.

Buffalo herds grazed much of the land, which was prairie, before European settlers arrived. The Cherokee Indians had a trading route that crossed Crowders Mountain, and the peaks marked boundaries between the hunting lands of the Catawba and Cherokee Indians.

In the early 1970s a mining company conducted exploratory sampling on the mountain as preparation to purchase the mineral rights. Thanks to grassroots efforts by local citizens, educational institutions, and organizations the state government was convinced that the area should be set aside and protected due to significant natural communities, plants and animals, intrinsic beauty, and unique recreational opportunities. In 1973 the State of North Carolina officially designated the area as Crowders Mountain State Park and it opened to the public in 1974. The Pinnacle was added to the park in 1987. Another 2,000 acres (8.1 km2) was added in the year 2000 and officially connected the park with Kings Mountain State Park and Kings Mountain National Military Park, both in South Carolina. 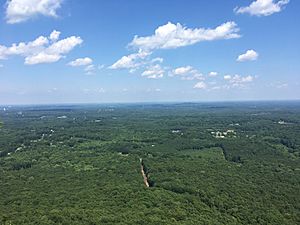 View from the summit of Crowders Mountain

Three hiking trails and one vehicle access trail lead to the summit of Crowders Mountain, and from the summit it is possible on a clear day to see the skyscrapers of Charlotte, North Carolina to the east.

All content from Kiddle encyclopedia articles (including the article images and facts) can be freely used under Attribution-ShareAlike license, unless stated otherwise. Cite this article:
Crowders Mountain State Park Facts for Kids. Kiddle Encyclopedia.