Cunnamulla War Memorial Fountain is a heritage-listed memorial at John Street, Cunnamulla, Shire of Paroo, Queensland, Australia. It was built c. 1924. It was added to the Queensland Heritage Register on 21 October 1992.

It is not known by whom the Cunnamulla War Memorial Fountain was designed. The concrete memorial honours those who fell during the First World War. The names of the fallen are not listed on the memorial, but on an honour board in the Civic Centre. Indeed, if not for an inscription, the fountain would be difficult to identify as a war memorial.

By 1920 the Paroo Shire Council had decided to erect a war memorial fountain in the centre of Cunnamulla town. However, it appears that the memorial was not erected immediately as in July 1924, the masonry firm of Andrew Lang Petrie, Brisbane wrote to the Paroo Shire Council offering designs. In September 1926, the Paroo Shire Council and the Diggers' Racing Club agreed to erect a fountain, expecting it to be in place in time for the Diggers' Carnival on 11-13 November that year. The design is a copy of a fountain in Rome erected some 400 years earlier and believed to be the work of the sculptor Carozzo; the Cunnamulla fountain was executed by R.C. Ziegler and Son.

It is unclear if there was an official unveiling ceremony, but on 26 November 1926 a photo of the "newly constructed Soldiers Memorial Fountain at Cunnamulla" appeared in a newspaper.

The town of Cunnamulla was first settled in the 1880s to serve the developing pastoral area. The Western railway line was extended to the town in 1898, increasing its importance as a centre for the district.

Many of the First World War monuments have been updated to record local involvement in later conflicts, and some have fallen victim to unsympathetic re-location and repair. Although there are many different types of memorials in Queensland, fountains were an uncommon selection as the main town memorial. They were more often used in school grounds where, as drinking fountains, they also served a useful function.

Fountains were selected as memorials in other places, as water was considered symbolic of renewed life and cleansing. Water is a significant element in many memorials of note, including The Pool of Reflection in the Australian War Memorial in Canberra. Many other smaller memorials had drinking spouts and water troughs incorporated into their designs.

As water is a scarce commodity in rural Queensland, a fountain may have been considered a suitable "sacrifice" as a memorial.

There was originally a captured gun or "war trophy" within the enclosure, but this was removed at some stage. 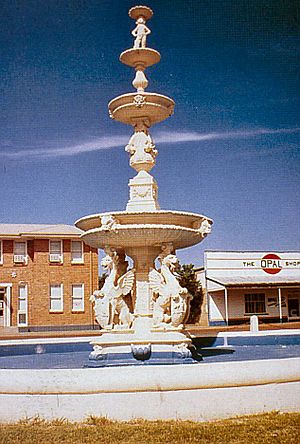 The First World War Memorial is situated in a five way intersection, forming a traffic island in the centre. It is surrounded by a grassed strip and enclosed by a low post and chain fence.

The concrete memorial comprises a shallow trough, with a tall and elaborate centrepiece. The trough measures 7 metres (23 ft) in diameter and is painted blue internally. A small leaded marble plaque on the north face bears the inscription:

Erected by the citizens of Paroo Shire in memory of those gallant Australians who fell in the Great War 1914 - 1918.

The centrepiece comprises four basins, decreasing in scale as they reach the peak. The lower basin has scalloped edges which incorporates heads of gargoyles. It is supported by four large winged griffins holding shields bearing emus and kangaroos. They sit on a base with foliated designs at the centre and corner of each face.

Above the first basin is a square pedestal with moulded festoons on each face. This is surmounted by an urn-like element with four small winged griffins and scrollwork at the top, which is the support for the second basin. This is also has scalloped edges and heads of gargoyles. The shaft continues to rises to a third basin which is simpler in design and is surmounted by a small boy figure. The final basin is located above the figure's head.

The entire shaft, which tapers towards the peak, is heavily ornamented with a variety of design elements, including scrollwork, panels and foliated patterns.

Cunnamulla War Memorial Fountain was listed on the Queensland Heritage Register on 21 October 1992 having satisfied the following criteria.

War memorial fountains of this scale are uncommon in Queensland, however water is a popular symbolic element suggesting renewed life and cleansing. It is rare as a war memorial with imagery not found on other memorials.

The memorial is of aesthetic significance as a distinctive landmark in the centre of a small country town.

All content from Kiddle encyclopedia articles (including the article images and facts) can be freely used under Attribution-ShareAlike license, unless stated otherwise. Cite this article:
Cunnamulla War Memorial Fountain Facts for Kids. Kiddle Encyclopedia.