Cupressus macrocarpa, (now classed as Hesperocyparis macrocarpa), commonly known as Monterey cypress, is a species of cypress native to the Central Coast of California. The native range of the species was confined to two small relict populations, at Cypress Point in Pebble Beach and at Point Lobos near Carmel, California. 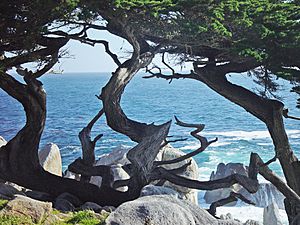 Cupressus macrocarpa is a medium-sized coniferous evergreen tree, which often becomes irregular and flat-topped as a result of the strong winds that are typical of its native area. It grows to heights of up to 40 meters (133 feet) in perfect growing conditions, and its trunk diameter can reach 2.5 meters (over 8 feet). The foliage grows in dense sprays which are bright green in color and release a deep lemony aroma when crushed. The leaves are scale-like, 2–5 mm long, and produced on rounded (not flattened) shoots; seedlings up to a year old have needle-like leaves 4–8 mm long.

The seed cones are globose to oblong, 20–40 mm long, with 6–14 scales, green at first, maturing brown about 20–24 months after pollination. The pollen cones are 3–5 mm long, and release their pollen in late winter or early spring.

It has been widely reported that individual C. macrocarpa trees may be up to 2,000 years old, but this is disputed by botanists, and the longest-lived report based on physical evidence is of a tree 284 years old. 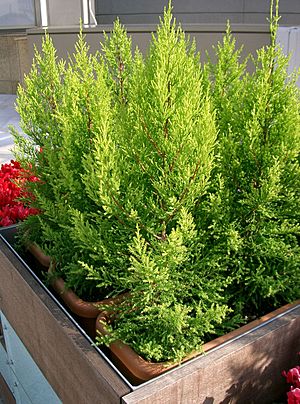 The two native cypress forest stands are protected, within Point Lobos State Reserve and Del Monte Forest. The natural habitat is noted for its cool, moist summers, almost constantly bathed by sea fog. This species has been widely planted outside its native range, particularly along the coasts of California and Oregon. It has also been grown experimentally as a timber crop in Kenya.

Monterey cypress has been widely cultivated away from its native range, both elsewhere along the California coast, and in other areas with similar cool summer, mild winter oceanic climates. It is a popular private garden and public landscape tree in California.

The foliage is slightly toxic to livestock and can cause miscarriages in cattle. Sawn logs are used by many craftspeople, some boat builders and small manufacturers, as a furniture structural material and a decorative wood because of its fine colours. It is also a fast, hot burning, albeit sparky (therefore not suited to open fires), firewood.

In Australia and New Zealand, it is most frequently grown as a windbreak tree on farms, usually in rows or shelter belts. It is also planted in New Zealand as an ornamental tree and, occasionally, as a timber tree.

All content from Kiddle encyclopedia articles (including the article images and facts) can be freely used under Attribution-ShareAlike license, unless stated otherwise. Cite this article:
Cupressus macrocarpa Facts for Kids. Kiddle Encyclopedia.