Curly Top (1935) is an American musical film directed by Irving Cummings. The screenplay by Patterson McNutt and Arthur J. Beckhard focuses on the adoption of a young orphan (Shirley Temple) by a wealthy bachelor (John Boles) and his romantic attraction to her older sister (Rochelle Hudson).

Together with The Littlest Rebel, another Temple vehicle, the film was listed as one of the top box office draws of 1935 by Variety. The film’s musical numbers include "Animal Crackers in My Soup" and "When I Grow Up".

This film was the first of four films that Shirley Temple and Arthur Treacher cooperated in; others were Stowaway (1936), Heidi (1937) and The Little Princess (1939). 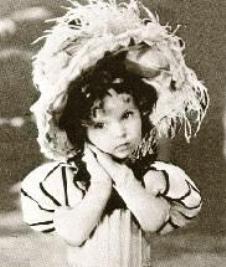 Young Elizabeth Blair (Shirley Temple) lives at the Lakeside Orphanage, a dreary, regimented place supervised by two decent but dour women. Her older sister Mary (Rochelle Hudson) works in the kitchen, laundry, and dormitory. Elizabeth is a sweet child but her high spirits often lead her into trouble with the superintendent.

When the trustees descend on the orphanage for a tour of inspection, Elizabeth is caught playfully mimicking the head trustee and is threatened with being sent to a public institution. Young, rich, handsome trustee Edward Morgan (John Boles) intervenes. He takes a liking to Elizabeth and, in a private interview with the child, learns that most of her life has been spent obsequiously expressing her gratitude for every mouthful that has fallen her way. He adopts her but, not wanting to curb Elizabeth’s spirit by making her feel slavishly obligated to him for every kindness, he tells her a fictitious “Hiram Jones” is her benefactor and he is simply acting on Jones’s behalf as his lawyer. He nicknames her "Curly Top." Meanwhile, he has met and fallen in love with Elizabeth’s sister Mary but will not admit it.

Elizabeth and Mary leave the orphanage and take up residence in Morgan's luxurious Southampton beach house. His kindly aunt, Genevieve Graham (Esther Dale), and his very proper butler Reynolds (Arthur Treacher) are charmed by the two. Elizabeth has everything a child could want including a pony cart and silk pajamas.

Mary secretly loves Morgan but, believing he has no romantic interest in her, she accepts an offer of marriage from young navy pilot Jimmie Rogers (Maurice Murphy). Morgan is taken aback but offers his congratulations. Hours later, Mary ends the engagement when she realizes she doesn't truly love Jimmie. Morgan then declares his love, reveals he is the fictitious “Hiram Jones,” and plans marriage and a long honeymoon in Europe with Mary. 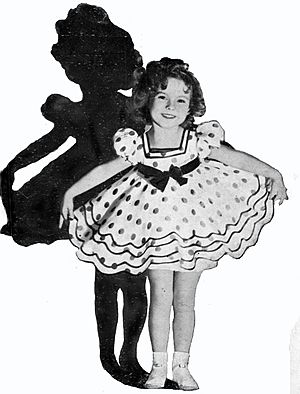 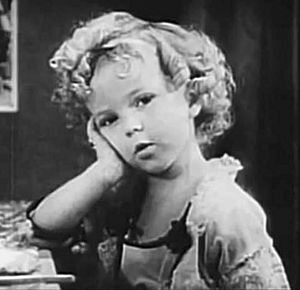 Curly Top was filmed in May and June 1935 and released on July 26. It was based on Jean Webster's 1912 novel Daddy-Long-Legs and was one of four Temple remakes of Mary Pickford films.

Temple’s mother coached her daughter on the set and at home. Director Cummings noted that Temple’s mother was thorough, teaching her daughter her dialogue and how to say her lines, what facial expressions to use, and how to walk, sit, stand, and run. According to Cummings, Mrs. Temple was “much more Shirley’s director than I am,” and that there was very little left for him to do when Temple arrived on the set.

As a souvenir, Temple received the film's doll house with hooked rugs on its parquet floors, chintz curtains at its windows, crisp sheets on its beds, fake food in its refrigerator, bric-a-brac on its tiny tabletops, books on its shelves, and its toilet with a working lid. Every drawer and every door in the doll house opened. It was kept in Temple's cottage bedroom on her parents' estate and displayed for child visitors.

“Animal Crackers in My Soup” and “When I Grow Up” became hits in their own right, selling thousands of sheet music copies and placing Shirley on the charts in the company of musical superstars Bing Crosby, Nelson Eddy, and Alice Faye.

All content from Kiddle encyclopedia articles (including the article images and facts) can be freely used under Attribution-ShareAlike license, unless stated otherwise. Cite this article:
Curly Top Facts for Kids. Kiddle Encyclopedia.