The curry tree (Murraya koenigii) is a tropical to sub-tropical tree in the family Rutaceae (the rue family, which includes rue, citrus, and satinwood), which is native to India and Sri Lanka.

Its leaves are used in many dishes in India, Sri Lanka, and neighbouring countries. Often used in curries, the leaves are generally called by the name 'curry leaves', although they are also literally 'sweet neem leaves' in most Indian languages (as opposed to ordinary neem leaves which are very bitter. 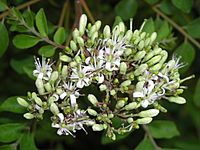 The small flowers are white and fragrant 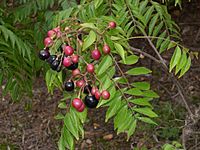 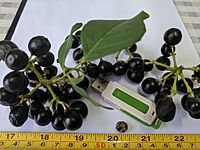 It is a small tree, growing 4–6 m (13–20 feet) tall, with a trunk up to 40 cm (16 in) diameter. The aromatic leaves are pinnate, with 11–21 leaflets, each leaflet 2–4 cm (0.79–1.57 in) long and 1–2 cm (0.39–0.79 in) broad. The plant produces small white flowers which can self-pollinate to produce small shiny-black berries containing a single, large viable seed. Though the berry pulp is edible—with a sweet but medicinal flavour—in general, neither the pulp nor seed is used for culinary purposes.

The leaves are highly valued as seasoning in southern and west-coast Indian cooking, and Sri Lankan cooking especially in curries, usually fried along with the chopped onion in the first stage of the preparation. In their fresh form, they have a short shelf life and do not keep well in the refrigerator. They are also available dried, though the aroma is largely inferior. They do, however, keep quite well frozen if well wrapped. Leaves can also be harvested from home-raised plants as it is also fairly easily grown in warmer areas of the world, or in containers where the climate is not supportive outdoors.

The leaves of Murraya koenigii are also used as an herb in Ayurvedic medicine. They are believed to possess anti-diabetic properties. 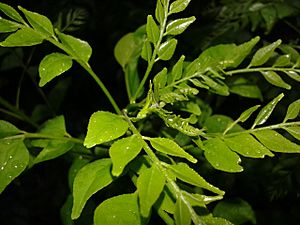 Curry leaves in a tree in Assam

Although most commonly used in curries, leaves from the curry tree can be used in many other dishes to add flavour. In Cambodia, Khmer toast the leaves in an open flame or roast it until crispy and then crush it into a soured soup dish called Maju Krueng.

Seeds must be ripe and fresh to plant; dried or shriveled fruits are not viable. One can plant the whole fruit, but it is best to remove the pulp before planting in potting mix that is kept moist but not wet.

All content from Kiddle encyclopedia articles (including the article images and facts) can be freely used under Attribution-ShareAlike license, unless stated otherwise. Cite this article:
Curry Tree Facts for Kids. Kiddle Encyclopedia.