Cybele is a sculpture by French artist Auguste Rodin. It is one of the first of Rodin's partial figures known as "fragments" to be displayed as sculpture in its own right, rather than an incomplete study.

Inspired by fragments of Greek art and incomplete work by Michelangelo, Rodin modeled a small study of a headless, seated woman. Following a scandal in 1877 when Rodin was wrongly accused of casting The Age of Bronze from life, the artist usually preferred to make sculptures that were smaller than life. This monumental work was displayed as A Figure at the 1905 Salon de la Société Nationale des Beaux-Arts in Paris. At that time, the sculpture was informally known by Rodin's friends and workers as Abruzzesi Seated after the woman who served as the model.

It wasn't until 1914 that the work acquired its current name, Cybele, after the fertile Phrygian mother goddess. A bronze cast of the enlarged version was exhibited as Cybele at an exhibition at Grosvenor House in London that year. The ample figure of the sculpture may have suggested the title to Rodin. 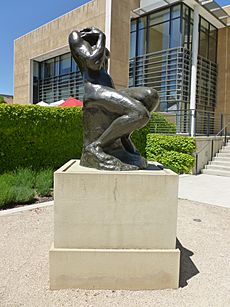 The statue at Stanford University in 2011

The plaster version displayed at the 1905 Salon is now at the Musée des Beaux-Arts de Bordeaux. Many bronze casts have been made that are displayed at locations including:

All content from Kiddle encyclopedia articles (including the article images and facts) can be freely used under Attribution-ShareAlike license, unless stated otherwise. Cite this article:
Cybele (sculpture) Facts for Kids. Kiddle Encyclopedia.