Cynthia Henri McLeod (née Ferrier; born 4 October 1936) is a Surinamese novelist known for her historic novels and whose debut novel instantly made her one of the most prominent authors of Suriname.

McLeod was born in Paramaribo as Cynthia Ferrier; she is the daughter of Johan Ferrier, the first President of Suriname. She is the half-sister of Dutch politician Kathleen Ferrier.

She completed her secondary school education in Suriname and continued her education in the Netherlands, where she studied to become a teacher in Child Care and Education. She married Dr. Donald McLeod whom she met in the Netherlands. As a teacher, she participated in a project for education renewal, and wrote a number of stories for children which were published in the series Van Hier en daar en Overal. In 1962 they went to Suriname, where McLeod studied for a teaching degree in Dutch language and Dutch literature. From 1969 to 1978 she taught Dutch language and literature in pre-university education in Paramaribo. Her husband, Donald McLeod, was appointed in 1978 as Suriname’s Ambassador to Venezuela. He later became Suriname’s ambassador to Belgium and the United States. Abroad, McLeod started writing; during her stay in Belgium she had the opportunity to do research in the archives of The Hague, Amsterdam, Rotterdam, Emmerich, and Köln.

In 1986 the McLeods returned to Suriname and in 1987 her debut novel Hoe duur was de suiker? (The Cost of Sugar) was published by publisher Vaco in Paramaribo. The first print was sold out within a few weeks and Cynthia McLeod became the most famous Surinamese novelist overnight. Later this historical novel about the sugar cane industry in the 18th century was published under license by her Dutch publisher Conserve. The novel was later turned into a movie with the same name, and broadcast as a mini series by VARA Television. Soon other historical novels from her hand appeared, such as Herinneringen aan Mariënburg.

McLeod studied the life of Elisabeth Samson for over eleven years. Samson was a free black woman whose name occurs prominently in historical works on Suriname because she wanted to marry a white man (which was forbidden in the colony Suriname during the first half of the 18th century). The results of this research were first published as a study by the Faculty of Cultural Anthropology of the University of Utrecht. For eight years subsequently McLeod studied the social structure and life of that period, which allowed her to position Elisabeth as a rich free black person in this society dominated by prejudices and white supremacy. She then wrote the novel: The Free Negress Elisabeth. 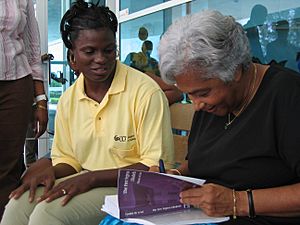 Cynthia McLeod (right) signing a copy of her novel in Miami, Florida, USA in 2005

As a result of her research McLeod has gained a wealth of knowledge about Surinamese history, knowledge she gladly shares with others. She organizes free educational trips for Surinamese school youth with her motorized vessel, the Sweet Merodia. During these tours on Surinamese rivers, past former plantations, she captivates her audiences with stories about its interesting past. She further engages in historic city tours through the centre of historic Paramaribo, which has been a UNESCO World Heritage Site since 2002.

All content from Kiddle encyclopedia articles (including the article images and facts) can be freely used under Attribution-ShareAlike license, unless stated otherwise. Cite this article:
Cynthia McLeod Facts for Kids. Kiddle Encyclopedia.