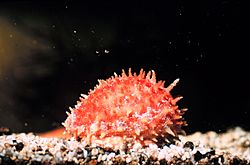 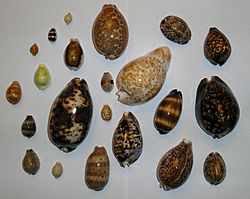 Various species of cowry from all over the world

Cowry shells (or cowrie), are marine snails of the family Cypraeidae.

They are found chiefly in tropical regions. There are about 200 different species of cowry.

The shell itself is almost always very smooth and shiny. They have with a long, narrow, slit-like opening. All varieties have a porcelain-like shine and many have colorful patterns. In life the shell is covered by the slippery mantle.

The slippery shell is very difficult for most animals to grip. The very narrow toothed aperture of the cowry shell makes it difficult for predators to reach into. However cowries are still vulnerable to predation:

For nearly 200 years, every species in the family Cypraeidae was placed in one genus, Cypraea, but in 2002 the cowries were divided into many different genera.

Cowries (esp. Cypraea moneta) were used as a currency in Africa (Ghanaian cedi in Ghana named after cowry shells) and elsewhere, such as in China where the shell or copies of the shell were in theory used as a means of exchange. They are also worn as jewelry or otherwise used as ornaments or charms, as they are viewed as symbols of womanhood, fertility, birth and wealth. Many find the shiny, porcelain-like shells pleasing to look at.

Cowries have also been used in the recent past as a frame over which sock heels were stretched for darning. The cowry ridges allowed the needle to get under the cloth more easily.

The Ojibway aboriginal people in North America used the cowry shells in ceremonies, and the Whiteshell Provincial Park in Manitoba, Canada is named after this type of shell. There is some debate about how they traded for or found these shells so far inland, away from the natural sources. Oral stories and birch bark scrolls seem to indicate that they were found in the ground, and/or washed up on the shores of lakes or rivers. The cowry shells so far inland may indicate the use of them by an earlier tribe or group in the area, and an extensive trade network in the ancient past.

All content from Kiddle encyclopedia articles (including the article images and facts) can be freely used under Attribution-ShareAlike license, unless stated otherwise. Cite this article:
Cowry Facts for Kids. Kiddle Encyclopedia.