Whiteshell Provincial Park is a 2,721 km2 park centrally located in Canada in the province of Manitoba. It is found in the southeast region of the province along the Manitoba-Ontario boundary, approximately 130 km east of the city of Winnipeg. The park is located in the Canadian Shield region and has many rivers, remote lakes, boreal forest and bare granite ridges. It has rare archeological sites of petroforms on flat granite ridges. The park is used year-round for nature-oriented recreation activities.

Whiteshell Provincial Park was designated a provincial park by the Government of Manitoba in 1961. The park is considered to be a Class II protected area under the IUCN protected area management categories. 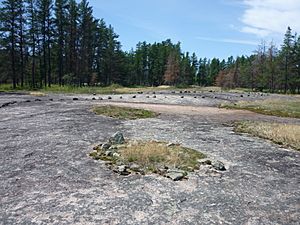 The Ojibway people and various other groups before them initially populated the area. The Ojibway, or Anishinaabe, first mapped some of the area on birch bark. The name of the park is derived from the cowrie shells that were used in ceremonies by the Anishinaabe, including the Ojibway, and among them the Midewiwin practitioners. The historic Winnipeg River and the Whiteshell River are the main rivers that run through the park. For thousands of years, aboriginal peoples used the area for harvesting wild rice, hunting, fishing, trade, ceremonies, teaching, and dwelling. In 1734, La Vérendrye was the first European to explore the area during his quest for a route to the Western Sea. First Nations, fur traders, and trappers used the Winnipeg River as the main travel route through this area, as well as the Whiteshell River.

Whiteshell Provincial Park has many pink granite ridges, cliffs, and flat granite areas used for petroform making by First Nation peoples. There is also archaeological evidence of ancient copper trading, prehistoric quartz mining, and stone tool making in the area. The copper trade, which extended toward Lake Superior, began approximately 6,000 years ago. Many artifacts and prehistoric camps were discovered in Whiteshell Provincial Park and are protected under the Heritage Act of Manitoba. The park is still used by aboriginal peoples for wild rice harvesting and ceremonies.

Around 1920, the development of roads brought tourists into the Whiteshell area. The first summer cottages were close to the Canadian Pacific Railway and the Canadian National Railway. In 1922 Brereton Lake Dominion Park was created. A decade later and in 1930 the park was transferred to the province of Manitoba and established the Whiteshell Forest Reserve. Further roadwork continued, linking the reserve to Ontario in the east and campgrounds and picnic sites further north. In 1961, Whiteshell was given Provincial Park status. A Manitoba Historical Plaque was erected at the Whiteshell Provincial Park by the province to commemorate Dawson Road's role in Manitoba's heritage. 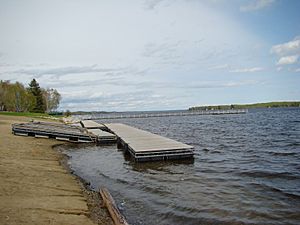 Whiteshell Provincial Park contains thirteen main freshwater lakes which are used for recreation such as boating, watersports and angling. These lakes are:

There are many more remote lakes throughout the park that are not easily accessible, such as George Lake, Crowduck Lake, and Horseshoe Lake.

The main park entrance is located at Falcon Lake, immediately south of the Trans-Canada Highway. Falcon Lake has three provincially operated campgrounds, a beach, golf course, ski resort, riding stables and many other tourist services. It is the west end of Manitoba Provincial Road 301 which runs east through Faloma, Toniata, and Star Lake to the community of West Hawk Lake.

Located at West Hawk Lake, the West Hawk Museum features exhibits about the area's geology, area gold mining, and the formation of the lake from the impact of meteorite that formed the West Hawk crater.

The Whiteshell Fish Hatchery Interpretive Centre allows visitors to learn about the hatchery's activities in raising lake sturgeon, trout and walleye. The hatchery is located along the Whiteshell River just north of West Hawk Lake. The fish in the hatchery are used to help stock lakes throughout Manitoba. It is open during the summer months.

The Alfred Hole Goose Sanctuary and Interpretive Centre is located at PTH 44, slightly east of Rennie. The sanctuary protects nesting Canada geese each spring. The interpretive centre provides information about the biology of the geese and the history of the sanctuary, as well as an observation gallery for the lake and interpretive programs.

The Whiteshell Trappers Museum is located on the grounds of the Alfred Hole Goose Sanctuary. Built in 1997, the museum resembles a fur trapper's cabin. Interpreters discuss the history of fur trapping, trapping techniques, and local wildlife. 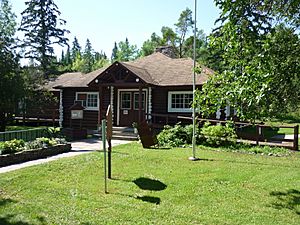 The Whiteshell Natural History Museum, opened in 1960 and located in a log building, features mounted wildlife displays of local animals. Other displays include the boreal forest, Canadian Aboriginal peoples, petroforms, sturgeon and the Winnipeg River. The museum is open during the summer season, and is located on PR 307 at Nutimik Lake. Admission is free.

The park may be accessed from the south side via the Trans-Canada Highway (Hwy 1), where visitors will enter near Falcon Lake and West Hawk Lake. The park may also be accessed from the west side via Provincial Road 307 at Seven Sisters Falls or Provincial Trunk Highway 44 at Rennie. The other major highway in the park, Provincial Road 309, connects Provincial Road 307 at White Lake with Lone Island Lake and Big Whiteshell Lake. The park is located along the eastern side of Southern Manitoba, along the Ontario border. When arriving in Manitoba from the east, it is the first area that is entered, along the Trans-Canada Highway. There is one road that enters into Manitoba from the east side due to the difficult Canadian Shield terrain and efforts to protect the park areas.

Park vehicle permits are typically required year-round in Manitoba Provincial Parks. Permits are available at all campgrounds and district offices, as well as most business locations where fishing and hunting licenses are sold. 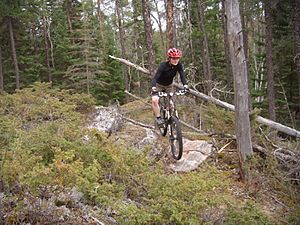 All content from Kiddle encyclopedia articles (including the article images and facts) can be freely used under Attribution-ShareAlike license, unless stated otherwise. Cite this article:
Whiteshell Provincial Park Facts for Kids. Kiddle Encyclopedia.