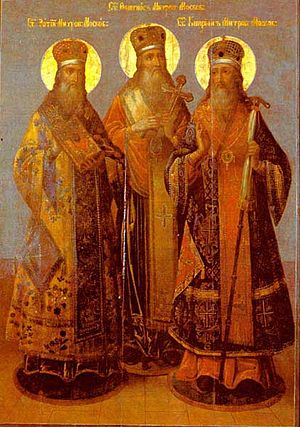 Cyprian (Bulgarian: Киприан, Russian: Киприан, Ukrainian: Кипріан) (c. 1336 – 16 September 1406) was a hierarch and bishop of the Ecumenical Patriarchate of Constantinople, bright opinion writer, editor, translator, and book copyist. He is best known as Metropolitan of Kiev and All Rus' with the Metropolitan see in Moscow. He is commemorated by the Russian Orthodox Church on May 27 and September 16 (by the Old style).

Cyprian was a clergyman with Bulgarian antecedents (or possible Bulgarian descent). He is supposed to have been born in aristocratic family of Tsamblak from Great Tarnovo. After his upbringing, education, and worldview, he was a hesychast (see Hesychasm). As a young man Cyprian had studied at Kilifarevo, just south of Tarnovo, where he possible accepted his monastic vows and where a disciple of Gregory of Sinai named Theodosius of Tarnovo had founded a Hesychast monastery. In Kilifarevo monastery Cyprian met with future Bulgarian patriarch Euthymius who also was studying hesychasm. In 1363 along with Euthymius, Theodosius, and two of Theodosius's followers, Cyprian arrived in Constantinople where he was introduced to Patriarch Callistus I and for a few months studied at the Monastery of Stoudios. Following the death of Theodosius (27 November 1363), Cyprian continued his studies at Mount Athos, becoming a Hesychast. On the other hand, according to Dimitri Obolensky, Cyprian only became a monk in the early 1370s in Constantinople. At Mount Athos Cyprian befriended Philotheus Kokkinos. In the beginning of the 1370s, after the return of Philotheus to the patriarchal throne, Cyprian became "his closest monk".

In 1373, following three unsuccessful raids of the Grand Duke of Lithuania Algirdas against Muscovy as part of the Lithuanian–Muscovite War and the schism of Metropolitan of Kiev on Muscovite and Litvin parts (the schism started in 1316 and has taken particularly threatening forms in the beginning of the 1350s). Cyprian was sent by the Patriarch as "trustee" (envoy) to the Lithuanian and Muscovite Russias with the goal to reconcile Litvin and Tverite princes with de facto Muscovite Metropolitan Alexius and prevent total division of the Church politically between Wilno and Moscow. Perhaps, in winter of the same year Cyprian visited Kiev for the first time along with other cities of the Grand Duchy of Lithuania. On 9 March 1374 he visited Tver on consecration of the bishop of Tver Euthymius and later along with Metropolitan Alexius left for Pereslavl-Zalessky. To Constantinople Cyprian returned from the Grand Duchy of Lithuania carrying with him a letter from Orthodox Christian Lithuanian-Ruthenian (Russian) with a request to the patriarch to consecrate him as the Metropolitan of Lithuania.

Following renewed hostilities between Moscow and Lithuania in August of 1375 after capturing of Tver by the Muscovite troops, facing with a potential threat of Catholization of Eastern Orthodox population of the Grand Duchy of Lithuania and prevent total division of the Ruthenian (Russian) metropolitan diocese, Philotheus I agreed to satisfy the previous petitions of Grand Duke of Lithuania Algirdas to create a separate metropolitan diocese in the Grand Duchy of Lithuania as well as the last petitions of his Eastern Orthodox princes to have Cyprian as their metropolitan. On 2 December 1375 at the Constantinople Council Philotheus I consecrated Cyprian as "Metropolitan of Kiev, Russia and Lithuania", but under a condition that “upon the death of Alexis, Cyprian should become the Metropolitan of Kiev and All Rus”. On 6 June 1376 Cyprian arrived to Kiev as his residence and immediately attempted to get recognition of his rights onto whole metropolitan diocese from the Grand Duke of Moscow Dmitri Donskoi, Novgorod, and Pskov, but futile (all those territories were governed by the Golden Horde through the Khan's jarlig).

In 1378, Metropolitan Alexius died. As a result of the ensuing skirmishes and intrigues, Cyprian became Metropolitan of Moscow in 1381. At Moscow, Cyprian endured many sorrows from the Great Prince, so at first he lived either in Lithuania or at Constantinople.

Cyprian is remembered as a wise and experienced church administrator who fought for the unity of the Russian church. In fact, he is mainly responsible for uniting the Church in Russia and the Grand Duchy of Lithuania. He faced serious opposition during his metropolitanate; Dmitry Donskoy and his advisors were excommunicated for opposing Cyprian's efforts to take up his place in Moscow, and Novgorod the Great – especially Archbishops Aleksei and Ioann II – also opposed his efforts to adjudicate ecclesiastical cases there, which would have allowed him to gain the court fees from Novgorod during the time he sat in judgement there.

Cyprian was an erudite person and oversaw the copying and creation of a number of important works, including the Troitskaia Chronicle (or Troitskaya letopis') and, probably, the Metropolitan Justice (also known as the Pravosudiye metropolich’ye or Правосудие митрополичье). He also rewrote the Life of Metropolitan Peter, originally written around 1327. He also corrected biblical books and translated a number of ecclesiastic works from Greek into Old Church Slavic.

The Book of Degrees (Stepénnaya kniga), which grouped Russian monarchs in the order of their generations, was started by Cyprian in 1390 (but completed only in 1563).

He died on September 16th, 1406. Cyprian is buried in the Assumption Cathedral in the Moscow Kremlin. He was canonized by the Russian Orthodox Church in the 15th century. St. Kiprian Peak on Greenwich Island in the South Shetland Islands, Antarctica is named for Cyprian.

All content from Kiddle encyclopedia articles (including the article images and facts) can be freely used under Attribution-ShareAlike license, unless stated otherwise. Cite this article:
Cyprian, Metropolitan of Kiev Facts for Kids. Kiddle Encyclopedia.