Cyril of Alexandria facts for kids

Cyril of Alexandria;(c. 376 – 444) was the Patriarch of Alexandria from 412 to 444. He was enthroned when the city was at the height of its influence and power within the Roman Empire. Cyril wrote extensively and was a leading protagonist in the Christological controversies of the late-4th and 5th centuries. He was a central figure in the Council of Ephesus in 431, which led to the deposition of Nestorius as Patriarch of Constantinople.

Cyril is counted among the Church Fathers and the Doctors of the Church, and his reputation within the Christian world has resulted in his titles Pillar of Faith and Seal of all the Fathers, but Theodosius II, the Roman Emperor, condemned him for behaving like a "proud pharaoh", and the Nestorian bishops at the Council of Ephesus declared him a heretic, labelling him as a "monster, born and educated for the destruction of the church."

Cyril is well-known due to his dispute with Nestorius and his supporter Patriarch John of Antioch, whom Cyril excluded from the Council of Ephesus for arriving late. He is also known for his expulsion of Novatians and Jews from Alexandria and for inflaming tensions that led to the murder of the Hellenistic philosopher Hypatia by a Christian mob. Historians disagree over the extent of his responsibility in this.

The Roman Catholic Church did not commemorate Saint Cyril in the Tridentine Calendar: it added his feast only in 1882, assigning to it the date of 9 February. This date is used by the Western Rite Orthodox Church. Yet the 1969 Catholic Calendar revision moved it to 27 June, considered to be the day of the saint's death, as celebrated by the Coptic Orthodox Church. The same date has been chosen for the Lutheran calendar. The Eastern Orthodox and Byzantine Catholic Churches celebrate his feast day on 9 June and also, together with Pope Athanasius I of Alexandria, on 18 January. 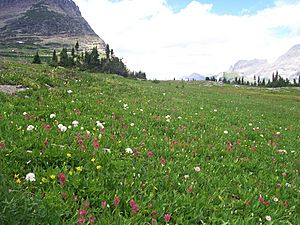 Clement describes the Stromata as a work on various subjects, which spring up in the text like flowers in a meadow.

All content from Kiddle encyclopedia articles (including the article images and facts) can be freely used under Attribution-ShareAlike license, unless stated otherwise. Cite this article:
Cyril of Alexandria Facts for Kids. Kiddle Encyclopedia.