Cystopteris bulbifera, with the common name bulblet fern, bulblet bladderfern, or bulblet fragile fern is a fern in the family Cystopteridaceae.

It is found only on calcareous substrates such as limestone. It commonly festoons limestone cave openings. While most commonly found on vertical rock faces, it also grows in rocky scree.

Cystopteris bulbifera is a low-growing rock fern with creeping stems and narrow elongate deltate fronds which grow to 75 cm (30 in). C. bulbifera is unusual among ferns in producing bulblets along the bottom of the fronds. This is one of the easiest Cystopteris species to identify. 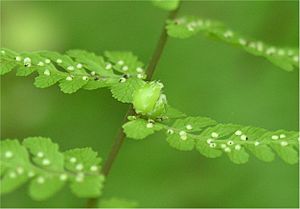 All content from Kiddle encyclopedia articles (including the article images and facts) can be freely used under Attribution-ShareAlike license, unless stated otherwise. Cite this article:
Cystopteris bulbifera Facts for Kids. Kiddle Encyclopedia.