D'Lo is a town in Simpson County, Mississippi, United States, along the Strong River. The population was 452 at the 2010 census. It is part of the Jackson, Mississippi metropolitan area.

The town was featured in Life magazine for sending more men per capita to serve in World War II than any other town of its size; 38 percent of the men who lived in D'Lo served.

In 2016 the town was featured on the UP reality TV series, Small Town, Big Mayor.

According to the United States Census Bureau, the town has a total area of 0.7-square-mile (1.8 km2), all land.

D'Lo was originally known as the village of Millhaven during the early 19th century due to the many watermills that dotted the Strong River in that area. It was not until 1874 that the first home was built there and the population began to grow slowly. The post office was established May 23, 1881, with Mary F. May as first postmaster. The name was changed to D'Lo effective January 1, 1950. After 1881 the Gulf and Ship Island Railroad was allowed to lay tracks through D’Lo resulting in a surge in population. Due to this increase of settlers in the community, on October 27, 1905, Governor James K. Vardaman declared D'Lo an official town. 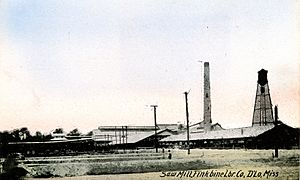 The Town of D’Lo began to expand in 1916 when the Finkbine Lumber Company chose it as the location for a $1,000,000 sawmill plant. Finkbine constructed many homes in the community for their workers as well as a combination drygoods, hardware, grocery store, farm supply, feed and seed, general store known as Kew Mercantile Company. During the peak of the Finkbine’s sawmill plant operation, between 1916 and 1930, D'Lo was recognized as the largest town between Jackson and Hattiesburg. The town featured two large YMCA buildings, a movie theater, ten grocery stores, a furniture store, three appliance dealers, ten gas stations, seven butcher markets, a dry cleaner, five cafes, three auto shops, a boat building and cabinet shop, a machine shop, three pharmacies, a bank, lighted basketball courts, professional basketball and baseball teams, and a newspaper called The D’Lo Herald. The town also had Baptist and Methodist churches, a three-story brick school with 550 students and 17 teachers, and a three-story hospital called Pine View which was considered the best hospital between Jackson and the Mississippi Gulf Coast, as far as equipment and doctors were concerned. During this time the population of D'Lo was estimated to be around 5,000, which made it the second largest milling town in the United States. However, by the 1930s the Finkbine Mill had consumed almost all the timber in the surrounding counties resulting in the plant being permanently shut down.

With the Finkbine sawmill closed, D'Lo began to see a major decline in population which had a tremendous effect on the local economy. It was not until several years later the town bounced back. This was mainly because U.S. Route 49 had just been paved through D'Lo and a second growth of timber was now available in the surrounding areas. With the new highway and more timber to mill, D'Lo seemed to be back on its feet with a new hardwood sawmill that reportedly supplied timber to firms that built weapons and equipment for World War II. Although the mill was effective at keeping D'Lo afloat for many years, it was never a large enough operation to recoup the huge loss of population. The town, which once had an estimated population of 5,000, dramatically dropped during the 1940s to around 400, which is still the estimated population. The huge drop in population did not stop the town from being one of the most patriotic American towns during the World War II era. Of the town's population of about 400, around 150 males served in the Armed Forces during the war. About 46 volunteers also served prior to the bombing of Pearl Harbor. So many citizens of D'Lo served in the war that the story was featured in the July 6, 1942 edition of Life magazine. The story featured a picture of two young boys standing in the deserted streets of D'Lo with the headline, “D'Lo Men Have Gone Off to War” with a caption that stated, “There is a war and a country is in danger. When that happens the men drop what they are doing and go off from the deep southern hamlet of D'Lo, Miss.” The town has since been recognized with a monument located at the town’s community center which lists the names of all the D'Lo citizens who served during the war.

The most controversial piece of D'Lo history is the origins of the name itself. There are currently three different stories that explain how the odd name originated. The oldest and probably the most common story is one that could easily be categorized as an “old wives' tale”. This story claims that an early settler referred to the D'Lo area around the Strong River where it commonly floods as being “too damn low”. When it came time for the village to get a post office he suggested that the village be named “too damn low” but the postal authorities would not approve of the profanity in the name. As an alternative someone came up with the name D-Low which over the years simply became the shortened version of D'Lo.

The next story came about after the original proposed name for the town, Millhaven, was rejected by the postal authorities as a town name. Purportedly the US Postal Service provided the village with a list of alternative four-letter names for the residents to choose from. Among these names was one spelled “Delo”. After the citizens chose this name a penman prepared a letter to be sent back to the authorities informing them of the name they had chosen. The letter was written in a fancy colonial script which more than likely would have put the little ‘e’ in Delo up above the "lo". The story concludes that the little ‘e’ was probably misinterpreted as an apostrophe and therefore documented the village name as being D'Lo.

The final story came about when the name Millhaven was rejected by the postal authorities as being an acceptable name for a town. The difference in this story is that the citizens of the village came up with the new name “De Leau”. This name was submitted and approved by the Postmaster but was later shortened to just D'Lo. Although this story seemed far-fetched the University of Southern Mississippi has proven that old maps from 16th-century French explorers show that they labeled the D'Lo area around the Strong River with the words “De l'eau sans potable”. This translates as “bad drinking water”. This leads us to believe that very early settlers and explorers may have been referring to this area as De leau and therefore that is why such an odd name was originally chosen to be the official village name.

There were 179 households, out of which 24.0% had children under the age of 18 living with them, 50.3% were married couples living together, 10.6% had a female householder with no husband present, and 35.8% were non-families. 34.1% of all households were made up of individuals, and 19.0% had someone living alone who was 65 years of age or older. The average household size was 2.20 and the average family size was 2.77. 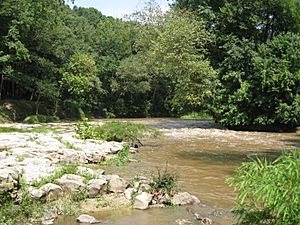 The Strong River at the D'Lo Water Park

D'Lo has a water park called D'Lo Water Park on the Strong River. There was a one-screen movie theatre, called the "Lux Theatre", but it closed in the 1950s.

The Town of D'Lo is served by the Simpson County School District.

All content from Kiddle encyclopedia articles (including the article images and facts) can be freely used under Attribution-ShareAlike license, unless stated otherwise. Cite this article:
D'Lo, Mississippi Facts for Kids. Kiddle Encyclopedia.