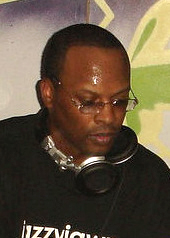 Jeffrey Allen Townes (born January 22, 1965), also known as DJ Jazzy Jeff, is a record producer of hip hop and R&B. He is best known for taking part at the beginning of his career with Will Smith as DJ Jazzy Jeff and the Fresh Prince.

DJ Jazzy Jeff graduated from the John Bartram High School in Philadelphia where his name is inscribed as one of the students outstanding.

DJ Jazzy Jeff is not to be confused with MC Jazzy Jeff, which, in fact, filed and won a lawsuit over the name Jazzy Jeff against Jeff Townes when Jive Records signed DJ Jazzy Jeff & the Fresh Prince.

He also participated in the series The Fresh Prince of Bel-Air as Jazz, making an appearance in several chapters.

All content from Kiddle encyclopedia articles (including the article images and facts) can be freely used under Attribution-ShareAlike license, unless stated otherwise. Cite this article:
DJ Jazzy Jeff Facts for Kids. Kiddle Encyclopedia.